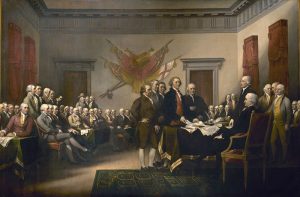 On July 4th, Americans will be celebrating the birth of our nation.  As genealogical researchers, we know the importance of finding a birth certificate.  We all have one.  It gives the vital information of our existence, and our heritage.   Even before the states made birth certificates mandatory, the birth was recorded in the family bible.  Our country also has a birth certificate.  It is the Declaration Of Independence.  http://www.ushistory.org/declaration/document/

The Revolutionary War began on April 19, 1775.  On July 4, 1776, our Continental Congress declared that the thirteen American colonies were no longer subject and subordinate to the monarch of Britain and were now united, free, and independent states. The Congress had voted to declare independence two days earlier, on July 2, but it was not declared until July 4.  Just as a birth is a difficult and painful process of separating a baby from the mother, our country also had a difficult and painful process of separating itself from England.  The war would last for 8 years.

“Skirmishes between British troops and colonial militiamen in Lexington and Concord in April 1775 kicked off the armed conflict, and by the following summer, the rebels were waging a full-scale war for their independence. France entered the American Revolution on the side of the colonists in 1778, turning what had essentially been a civil war into an international conflict. After French assistance helped the Continental Army force the British surrender at Yorktown, Virginia, in 1781, the Americans had effectively won their independence, though fighting would not formally end until 1783.”   https://www.history.com/topics/american-revolution/american-revolution-history

There have been Daughters of the American Revolution and Sons of the American Revolution applications for four of William Paschal’s sons Samuel, Isaiah, Elisha, and Thomas, and a his grandson George who supposedly fought in the war.   Two of Thomas Paschall’s grandsons who supposedly fought were Henry and Benjamin.  When filling out a DAR or SAR application, do your own research and do not copy existing applications.  With the records now available, some of these earlier applications are now in question.

Notice:  PROBLEMS HAVE BEEN DISCOVERED WITH AT LEAST ONE PREVIOUSLY VERIFIED PAPER – SEE ANCESTOR’S FULL RECORD  (WHY?)

Notice:  DATA IN THE CORRECTION FILE  (WHY?)