Chicago, August 22, 1892 – The Times states that the young woman who, according to the evening papers, was left at the detention hospital on Wednesday a “raving maniac” by a young man giving an assumed name, was in reality Miss Lillian C. Paschal, a reporter for The Times, who had been sent to the hospital to investigate certain charges against the institution.  The treatment of the helpless inmates, according to her experience, borders upon brutality, but the worst feature brought to light was the amazing stupidity of the physicians in failing to detect the ruse.  Argus-Leader, (Sioux Falls, South Dakota), Mon. Aug. 22, 1892, Page 2

Around the turn of the 20th century, Lillian Catherine Paschal was an undercover reporter for the New York Times.  She wrote and published many stories.  Born in 1874 in Winfield, Iowa, she was the daughter of James W. Paschal and Mary Jane Hale.  Lillian married Guy Warren Day on 2 May 1908 in Manhattan, New York, the son of Buel H. Day and Mary B. Whitcomb.  Guy died suddenly in 1911. Per his obituary in The Burlington Clipper, (Burlington, Vermont), 18 May 1911, Thu, Page 4, he and Lillian had no children.  In 1940, Lillian was listed on the Los Angeles Co., census as a writer of songs, stages, and stories.  Lillian died on 15 December 1958 and was buried in the Forest Lawn Memorial Park in Glendale, Los Angeles Co., CA, PLOT: Eventide, Map 1, Lot 141, Space 1. 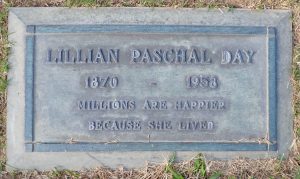 Lillian’s father, James W. Paschal, was the son of Joseph Paschal and ? Ramsey.  He married Mary Jane Hale on 19 December 1861 in Henry Co., Iowa.  According to the Census records, James and family were living in Scott, Henry Co., Iowa in 1870, in Union, Grant Co., Iowa in 1880.  James was born ca 1842 in Ohio.  He was a farmer in Iowa.  Their children were Howard T., Clyde P., Eugena, Mary, Eva Irene, and Lillian Catherine.  He married secondly to Miss Lydia A. Hale in 1895 in Creston, Union Co., Iowa and their child was Roy Blakeway Paschal.  According to the 1856 Iowa State Census Collection, Joseph Paschal was born ca 1800 in Virginia and he was a clergyman.