Emily Lavisa Paschall Dool (Dennis Potter, John T., Anderson, Dennis, William), was raised on a ranch in the Zayante district in the San Lorenzo valley in California.  Her father Dennis Potter Paschall acquired 143 acres in 1872.  His property was located in the area of the Big Basin Redwoods State Park.  Established in 1902, it is the oldest state park in California.  Emily married William H. Dool, who became the second warden of the Big Basin Redwoods State Park.  He established the roads, trails, and campsites that are still used today. She grew up looking at this beautiful landscape. 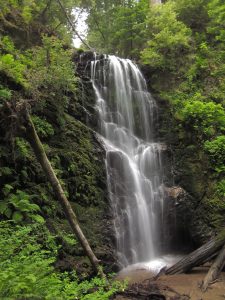 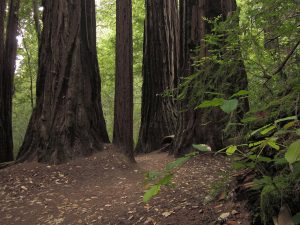 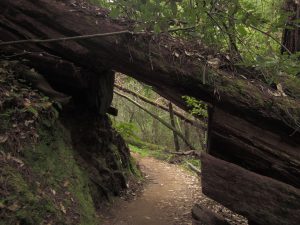 Below is William’s obituary, which describes his incredible life.

W. H. Dool, Warden of State Big Basin Park, Dies At Boulder Creek – William H. Dool, 20 years warden of the state redwood park at the Big Basin, in the northern part of this county, died suddenly of a heart attack last night at his residence in Boulder Creek. The body was today at Wessendorf’s mortuary and it was said that funeral services will probably be held Wednesday afternoon from his home in Boulder Creek, although the plans had not been definitely completed. Mr. Dool had been a resident of Boulder Creek for more than half a century.  In his younger days he worked as a “flume walker” to watch and keep in repair the old flume which carried lumber down the San Lorenzo valley from a point five miles above Boulder Creek to Felton, where it was loaded on the trains of the old narrow gauge railroad.  Born in Ottawa, Canada, June 30, 1857, he worked for a short time in the timber producing regions of Michigan until he came to California, where he first operated a hog ranch at what is now the intersection of Fourth and Santa Clara streets in San Jose.

Fifty-three years ago he came to Boulder Creek, where he had made his home since.  He became the first butcher in Boulder Creek, opening a meat market on the main street of Boulder Creek with A. H. Stagg as his partner.  Later Mr. Dool sold his interests to his partner.  In 1888 Mr. Dool was married to Miss Emma L. Paschall, whose parents [Dennis Potter Paschall and Lavisa Ellen Francis] owned a ranch in the Zayante district in the San Lorenzo valley.

For the past twenty years Mr. Dool has been warden of the big Basin state reserve and made countless numbers of friends among those who came to the park.  In 1911 Mr. Dool succeeded S. H. Rambo, who had been warden of the park for only a short while, taking that position when the reserve was set aside as a state park.  When Mr. Dool became warden of Big Basin there were not even any roads leading into the state park.  All of the present entrances and trails have been constructed during his administration.  The Big Basin Inn, the cottages, the warden’s office and the social hall were all erected under his supervision.  Scenic trails were laid out and the unusual trees named and marked. From a jungle of trees and heavy underbrush, the state park has become one of the most attractive in the state, under the direction of its warden.

Mr. Dool took an active interest in all civic affairs of his community, leading all movements for the betterment of the town.  He was an active member of the Santa Cruz order of I.O.O.F, a member for many years of the Foresters of America of Santa, a member of the Santa Cruz blue lodge No. 38 F. & A. M., … He took an active interest in the Boulder Creek volunteer fire department, the improvement club, the San Lorenzo Valley chamber of commerce and the Boulder Creek community church.  Many of the families of Boulder Creek will remember Mr. Dool with an added appreciation, for he was always the first of offer assistance to any one in need.  His charitableness and kindliness was known throughout the San Lorenzo valley.  Mr. Dool was president of the board of trustees of the Boulder Creek community church for a number of years.  Mr. Dool is survived by his wife, two daughters, Mrs. Arthur Watters of Boulder Creek and Mrs. Tom Cullen of Huntington Park; a sister living in Canada, and a brother in Pennsylvania.

Dool had walked to town early yesterday evening to purchase groceries for the lunch he planned to take to the park with him this morning.  He walked briskly up the steep hill to his home and it is believed that he over-exerted himself.  He picked up the paper to read before the fireplace and dropped suddenly to the hearth.  Death came almost instantly.  Dr. R. B. Hoag of Boulder Creek was called, but Mr. Dool was dead before he arrived. Santa Cruz Evening News, (Santa Cruz, CA) – Monday, December 7, 1931, Page 3.