New York – Dazed and amazed by it all, William Avner Paschal Jr., who was out two years after playing all of three minutes of college football – as a freshman – as the National league’s leading ground gainer.

Shy, blond and blue-eyed Bill Paschal came from nowhere as a nobody to put the New York Giants in the eastern division playoff for the right to battle the Chicago Bears for the championship.

The recurrence of a knee injury suffered while starring for Tech high of Atlanta put the 22-year-old, six-foot, 1930-pound Paschal on the sideline at Georgia Tech, where he matriculated on a scholarship.  Bill Alexander knew what he had.

“Oddly enough, smiles the personable Paschal, who is just a big kid. “I didn’t hurt the knee playing football.  I hurt it falling out of a double-decker bed while asleep at the University of Georgia, where my high school team was having fall practice.”

Young Paschal made the all city, state and southern teams in 1929, was coached by Gabe Tolbert, who turned out such luminaries as Tom Hargrove of Alabama and Stumpy Thomason of Georgia Tech.

Christmas of 1940 found Paschal minus the knee cartilage.  Georgia Tech paid the bill, but Bill married comely Carolyn [Brown], whom he met in college, had to drop out of school to be a bread winner, worked in the railroad yards.  From the time of his operation until August of this year, Paschal did not have a football in his hands.  But he possessed campus fever, hung around the Tech grounds, elbowing and chewing the fat with youngsters who would have been classmates.  Last March Coach Alexander asked Paschal if he would be interested in returning to football.  “Sure,” said Bill, “if my knee –”

Alexander buzzed Grantland Rice, who wrote Steve Owen.  Paschal arrived in New York in May, got a job in Brooklyn shipyard.

Professional players of any kind – especially the football variety – are hard to get these days, so you can imagine Stout Steve Owen’s delight when at Bear Mountain in August the unheralded  unknown snapped right into it – as tho he’d been playing all the while.  Whatta pickup!

Modest Bill Paschal gives all credit to Tuffy Leemans.  The Giants have the old college try, he points out, are nervous and tense before each game, fight for death ole Steve.  The lad talks with a pronounced southern accent.

Paschal played only briefly when Sid Luckman set records as the Bears smothered the Polo Grounders, 56-7, was grounded for practically three full games as the result of injuring his ankle in the match with Green Bay.  Yet he carried oftener than any other back in the circuit – 147 times for 572 yards and an average of 3.9.

Paschal assisted in coaching Trinity high of New York this fall, will be head man next season.  He is anxious to complete his education, plans to be a college coach.  At home he fiddles with a motion picture camera just purchased, taking shots of Billy III and Diane, eight weeks.

He is fond of mother’s cooking especially southern fried chicken, but his pretty missus better not hear of this.

His only idiosyncrasy is that his socks must be neatly straight in football shoes that fit perfectly, which is precisely how Bill Paschal fits into professional football. 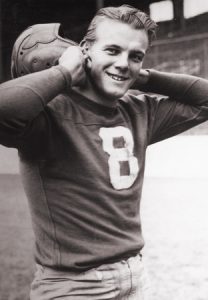 William Avner “Billy” Paschal Jr., inducted in the Georgia Sports Hall of Fame in 1979 for Football.  Georgia Tech Football Letterman ’42.  Pro Football with the New York Giants ’43-’47 and the Boston Yanks ’47-’48  Paschal became the first player to win back-to-back rushing championships in the NFL, gaining 572 yards in nine games his rookie year and 737 yards in 10 games his second year.  Named the Rookie of the Year in ’43 when he scored 12 touchdowns.  Named All Pro ’43, ’44, ’45.  He played through the 1948 season and had 2,430 yards for his career.  For more information , read the news article “Pascal Comes From Nowhere To Put Pro Giants in Playoff.”