Barbara Fleming has done extensive research on the Lothrop family, taking our line back to Walter Lawthrop born ca 1355.  (Barbara Fleming, 3245 Chadbourne Road, Shaker Heights, OH 44120, barbpretz@sbcglobal.net).  Her work is posted on https://sites.rootsweb.com/~barbpretz/ps06/ps06_074.htm  Barbara’s research on Rev. John Lothrop is quite impressive.  Here is just a smidgeon of what she has gathered about his fascinating life …

Rev. John Lothrop was baptized in 1584 in Etton, Yorkshire, England, died in 1653 in Barnstable, Massachusetts, and was buried in the Lothrop Hill Cemetery.  He graduated at Queens’ College, Cambridge with a Bachelor of Arts in 1605, and a Master of Arts in 1609.  He was the Vicar of Egerton, Kent, England in 1611-1623. He moved to Union Street, Southwark  in London in 1624, where he become the pastor of Henry Jacob’s Independent Congregational church.  Since independent worship from the Church of England was illegal, Lothrop’s services were conducted in secret. He was discovered, and in 1632, he and 43 church members were imprisoned.  Upon promising to leave the country they were released.  Rev. Lothrop and his family came to New England on the ship Griffin in 1634, and shortly afterwards organized a church in Scituate, Plymouth Co., Massachusetts. He was admitted a freeman of Plymouth colony, 1636-37.  Two years later he removed, with a large part of the membership of his church, to Barnstable, Massachusetts, where he held the first communion upon their  arrival.

“One of the remarkable things about John Lothrop, and the highest tribute to his character as a minister, was the way in which his congregation followed him throughout his wanderings. Many members of his original Kent and London gathering were with him in Scituate and accompanied him to Barnstable. History shows few more perfect examples of the shepherd and his flock.”  http://www.sturgislibrary.org/history/history-of-the-library/ 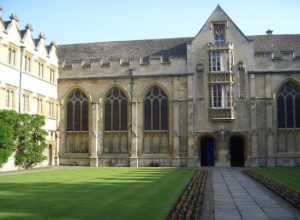 The Queen’s College Cambridge, founded 1341, by Robert de Eglesfield, chaplain to Queen Philippa of Hainault (the wife of King Edward III of England); hence its name.  Rev. John Lothrop matriculated in 1601, graduated with a BA in 1605, and with an MA in 1609. He was an English Anglican clergyman and dissident, who became a Congregationalist minister and emigrant to New England.  He was the founder of Barnstable, Massachusetts.  John’s brother Thomas was also admitted to Queen’s College in 1601 and received his Bachelor’s degree in 1604. https://enacademic.com/dic.nsf/enwiki/85827 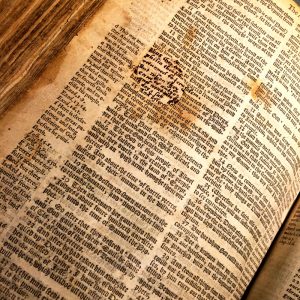 Rev. John would had received this Bible, published in 1605, as a graduation present from Queens’ College in Cambridge, England when he received his Bachelor of Arts.  Apparently, aboard the ship the Griffin, which brought many of the Lothrop congregation to New England, the Reverend accidently spilled hot candle wax on his Bible during evening prayer. The hot wax burned through several pages. However, Lothrop repaired each burned section, re-writing the damaged passages from memory.  http://wickedyankee.blogspot.com/2012/03/lothrop-bible-and-sturgis-library.html 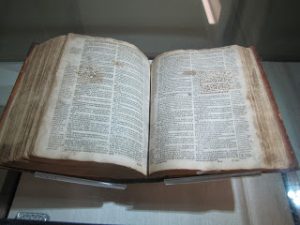 “More than 100 people crammed inside the Sturgis Library in West Barnstable yesterday to rededicate the Rev. John Lothrop’s 404-year-old Bible.  The book, which Lothrop used to found Scituate’s first church then another church in Barnstable five years later, is now encased in a museum-quality microclimate glass display case, thanks to a $3,000 grant.”  Article by Aaron Gouveia, 11 Oct 2009, Cape Cod Times  http://(https://www.capecodtimes.com/article/20091011/NEWS/910110325) 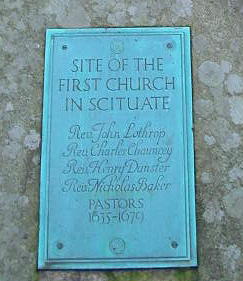 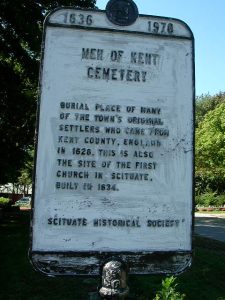 A small log cabin on Meeting House Lane served as the first church. The site is marked today by a monument that lists the early members of the parish, “The Men of Kent,” and by gravestones from the 17th century.  The Men of Kent Cemetery is Scituate’s oldest and most historically significant cemetery.  It was established in 1624, and the earliest legible gravestone is from 1694. Most of the slate markers are still in good condition.  http://www.firstparishscituate.org/history-of-first-parish.htm https://www.findagrave.com/cemetery/91222/men-of-kent-cemetery 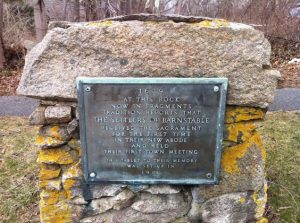 Sacrament Rock – Marker Commemorating the First Communion held at Barnstable upon the Rev. John Lothrop’s arrival.  The marker has been rebuilt out of fragments of the boulder that stood at the location of one of the first religious services.   The pewter communion service that was used (brought by Rev. Lothrop from England in 1634) is still in existence.  It was used monthly at the West Parish Church until 1993, when deterioration led it to be removed from use and put into safe keeping.  https://www.findagrave.com/memorial/7518784/john-lothrop

Constructed in 1644 for the Rev.  John Lothrop, founder of Barnstable, the house which forms the original part of the Library is the oldest Library building in the United States. The building is also one of the oldest houses remaining on Cape Cod. Since Rev. Lothrop used the front room of the house for public worship, another distinction of the Sturgis Library is that it is the oldest structure still standing in America where religious services were regularly held. This room, now called “The Lothrop Room,” with its beamed ceiling and pumpkin-colored wide-board floors, retains the quintessential early character of authentic Cape Cod houses. Rev. Lothrop’s bible, with handwritten repairs to the pages, is on display in this room.  On 25 Feb. 1782, William Sturgis, a direct descendant of Rev. Lothrop, was born in this house.  Photo by C J Gunther.  http://www.sturgislibrary.org/history/history-of-the-library/ 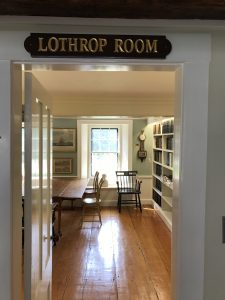 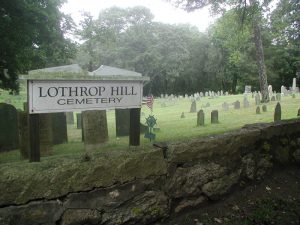 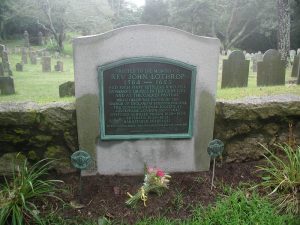 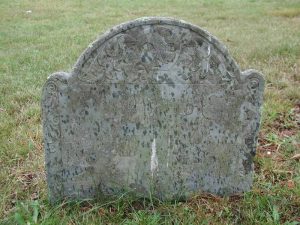 “Captain Joseph, born in 1624, married Mary Ansell, 11 Dec 1650.  He settled in Barnstable, was made freeman 8 June 1655, was selectman of the town 21 years, and its Deputy to the General Court of Massachusetts 15 years.  He was Registrar of the County Probate Court and was Constable, Lieutenant and Captain.  History speaks of him as a “Conspicuous member of the Council of war” in 1676.  He and his brother Barnabas were commissioned to hold select courts in Barnstable in 1679.  In the inventory of the estate of Joseph Lothrop are reported 27 volumes of law books and 43 volumes of classic and sermon books.”5 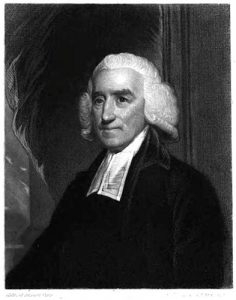 This portrait has been mistaken to be the portrait of Rev. John Lothrop, (1584-1653), the original American ancestor.  It is in fact the portrait of Rev. John Lothrop, (1740-1816), the great-great grandson of Rev. John.  The younger Rev. John served as minister of the Second Church, Boston, 1768-1816, when it was located in the North End—first on North Square, and after 1779, on Hanover Street.  In 1776, during the British occupation of Boston, the Second Church was burnt for firewood by British soldiers.  Lathrop was considered a patriot.  He was the second cousin twice removed of Reliance and Elizabeth Dennes Paschal. https://en.wikipedia.org/wiki/John_Lathrop_(American_minister)

4 A genealogical memoir of the Lo-Lathrop family in this country: embracing the descendants, as far as known, of The Rev. John Lothropp, of Scituate and Barnstable, Mass, and Mark Lothrop, of Salem and Bridgewater, Mass, and The first generation of descendants of other names. By the Rev. E. B. Huntington, A. M.  Copyright, 1884, by Julia M. Huntington. Ridgefield, Conn.