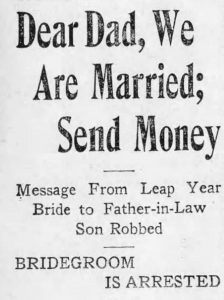 Philadelphia, June 30. — A leap year proposal made by Miss Carrie Moyer, a young Harrisburg girl, only a short while after she had made the acquaintance of Isadore Paschall, son of Samuel Paschall, formerly a furniture dealer at 428 Jackson street, was indirectly responsible for the arrest of the young man by Richard Doyle, a City Hall detective, who held a warrant charging him with the larceny of $265 in money from his father.

Paschall left his father’s home a week ago Friday, taking with him, it is said, $265 in cash and about $400 in checks.  The money had been gathered by the father to meet certain obligations which had been placed in the hands of the sheriff by his creditors.  The money was tied in a handkerchief and hidden beneath the mattress of a bed.

When it disappeared Paschall’s son was missed.  The police searched in vain for him and it was not until the father received the following note that a trace of the youth was obtained: “Dear Dad — Send more money, Harry is out of work.  Your Daughter-in-law.”

The father, who had been sold out by the sheriff, after his son disappeared, was greatly surprised upon the receipt of this note and he hastened to the Detective Bureau.  The note was dated from Steelton, and Saturday Dole hastened to that place.

After inquiry in Steelton, Paschall and his bride were located at 520 Lincoln street.  Paschall was taken into custody, and, according to Doyle, he admitted taking his father’s money.  He said he had spent it furnishing a home and buying his wife clothes.

Paschall was not at all reticent about his romance.  He said that after he had left his father’s home, he went to Harrisburg.  While there he met Carrie Moyer.  He told her it is declared, that he was a runaway from home and showed her his money.  He told her also that he had more.  Then came a surprising proposal from the girl. “You have no home, let us get married,” she said.

Paschall agreed and the couple went to the home of a preacher and were married.  After the ceremony they went to live in Steelton.  Money went fast and when the cash was gone, the bride wrote the note, which gave the detectives their clue.

Paschall was brought to this city by Doyle.  But when the elder Paschall saw his son, this morning, he agreed to forgive the boy and at a hearing before Magistrate Beaton, the charge was withdrawn and Paschall was discharged.

According to the detectives, Mrs. Paschall, the young bride, is on her way to this city to join her husband.  Mr. Paschall, the lad’s father, has had several misfortunes lately.  Only a month ago, he complained to the detectives that he had been robbed of nearly $1,000.  The robbery was a mysterious one, and the police never located the thief.

The Paschall’s featured in this newspaper article are not descendants of either William or Thomas.  They are later immigrants to America.

Records show Harry I. Pascal’s middle name as Isadore and Irwin.  His father Samuel, was the son of Louis and Sarah Pascal.  Samuel was born on 17 December 1862 in Romania, and died 19 December 1914 in Conshohocken, Montgomery Co., PA[i].  He, his wife, and son Charles immigrated to America in 1885 or 1886.  Samuel became a naturalized citizen on 27 May 1898 in New York, Kings Co., NY, where he was a harness maker by trade[ii].  Samuel and his wife would have three more children all born in New York: Harry I., Bernard, and David.  It would appear that Samuel’s wife died.  He was married secondly to Mrs. Dora Wildermun, who was born ca 1865 in Russia and immigrated in 1892.  Dora’s daughter, Elizabeth Wildermun, was born in 1894 in New York[iii].