Joseph Paschall (ID= B24), was the son of Thomas Paschall and Margaret Griffith Jenkins, and grandson of Thomas Paschall and Joanna Sloper.  Joseph was born on 23 March 1699 in Philadelphia, PA, and died on 26 December 1741 in Philadelphia[i].  Joseph belonged to one of the oldest Quaker families in Philadelphia county.  Both of his parents came to Pennsylvania in their youth with their parents, early in 1682, his father Thomas from Bristol, England, and his mother Margaret from Tenby, Penbrokeshire, Wales[ii].

Joseph married Elizabeth Coates on 28 Apr 1721 at the Darby Monthly Meeting in Chester, Pennsylvania[iii].  Elizabeth, the daughter of Thomas Coates and Beulah Jaques, was born on 12 March 1702 in Philadelphia, Pennsylvania, and died on 10 April 1767 in Philadelphia.  Joseph and Elizabeth had nine children: Joseph, Sarah, Isaac, Mary, Thomas, Beulah, Elizabeth, James, and Joseph.  Only Isaac, Beulah, and the youngest Joseph survived infancy.  Their son Isaac was the only child to marry, and he had two daughters, Elizabeth Coates Paschall and Sarah Paschall[iv].

Elizabeth was educated and introduced to entrepreneurship at a early age by both her mother and her father.  Her mother, Beulah, was a literary lady and educated Elizabeth at home.  She not only taught her the fundamentals of reading, writing, and arithmetic, she also taught her healing knowledge and remedies.  Elizabeth had a religiously inclined, educated, medically adept, and assertive mother as a role model[v].

Her father, Thomas, engaged in mercantile affairs on a considerable scale in Philadelphia.  He was a shipping merchant to and from foreign ports, and supplied planters and smaller dealers with the necessary staple merchandise.  He imported large quantities of goods from England, Barbados, and West Indies.  As was the custom of the well-to-do residents of Colonial Philadelphia, in addition to his town residence, he had a “county seat” at Frankford.  In 1714, he purchased several hundred acres of land, where he and his family would spend a portion of the summer months.  Thomas died in 1719, leaving a house on the north side of High Street in Philadelphia, along with all the back lots to Elizabeth[vi].

When Joseph and Elizabeth married in 1721, they took up residence in the house on High Street, later known as Market Street.  Joseph, became a prominent business man, owning a large dry goods store.  He was elected to the Common Council of the City of Philadelphia in October, 1732, and held the seat until his death in 1741.  He was also the founder of the first Volunteer Fire Company in Philadelphia, with his name heading the list of the twenty men who started the first Fire Engine Company on December 7, 1736, of whom Dr. Benjamin Franklin was one[vii].  Joseph conducted business with Dr. Franklin by purchasing schoolbooks for their son Isaac at Franklin’s shop.  “Franklin’s ledger D, page 58 records “Cordery for Isaac,” “Erasmus for Do,” a “Dutch grammar” and other texts “for Isaac.”[viii].

After Joseph died, Elizabeth continued with the dry goods business.  In addition to being a mother and a shopkeeper, she also practiced medicine.  She proudly recorded many medical recipes and “my own Invention”.  She discussed the efficacy and safety of drugs with a wide range of people, including doctors, botanists, apothecaries, midwives, relatives, friends, servants, and customers in her effort to discover the best cures[ix].

Elizabeth’s “Receipt Book” was photocopied by the Historical Collection of the College of Physicians of Philadelphia, and can be viewed online at  https://www.chstm.org/web_of_healing/archives/CP/paschall.html 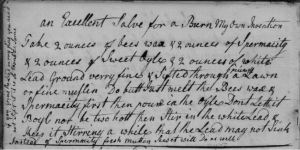 In 1746, Elizabeth took out an notice in the Pennsylvania Gazette … “Elizabeth Paschall, Shopkeeper, in Market Street, intending to take down and re-build the house she now lives in, and remove for the space of 3 months to the house where Robert Jordan formerly lived in Strawberry Alley; will continue to sell all sorts of Merchant’s Goods as usual.  All persons indebted to the estate of her deceased husband, Joseph Paschall, are desired to pay their respective debts, or she must proceed against them, as the Law directs.”

After renovating the Market Street property, the store was on the main floor and their residence was upstairs.  Elizabeth desired a “county seat” to retreat from city life.  She purchased thirteen acres of land from her brother, Samuel Coates.  The land was previously part of her father’s Frankford property.  In 1748, she began construction on a country house of native grey stone, in which she named “Cedar Grove”.   The construction was completed in 1750[x].

The original house consisted of two rooms on the first floor, the present dining room and the room back of it, two rooms on the second, and the attic space above.  The house was exceedingly small, but a rural house was not meant for a dwelling house.  It was designed to be used merely as a shelter for rest and refreshment when the owner or any member of the family might be spending the day at the farm.  Elizabeth and the children could spend time between the two houses.  The Market Street house and Cedar Grove were only five miles apart [xi]. 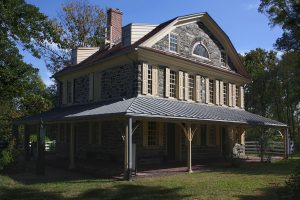 Upon Elizabeth’s death, Isaac and Joseph liquidated her stock in the store with an advertisement in The Pennsylvania Chronicle.  Cedar Grove was passed to her unmarried daughter Beulah, who, upon her death, passed it to her niece, Sarah Paschall Morris.

Additions to the house were made by Beulah Paschall and succeeding generations. Sarah Paschall Morris doubled the size of Cedar Grove with more rooms and a third floor. A wraparound porch was added later. Various architectural styles such as Baroque, Rococo, and Federal are evident in the interior rooms.

Lydia Thompson Morris, the last of the family to own Cedar Grove, gave the house and original furniture to the City of Philadelphia in 1926. The house was originally located within the present day Frankford neighborhood of Northeast Philadelphia, about 4 miles from the colonial-era city limits. The house was moved from Frankford to Fairmount Park in 1926–28. The Philadelphia Museum of Art administers the house and has kept it fully furnished with period furniture passed down by generations of the Paschall/Morris family. Guided tours of the house are available through the Art Museum.  Cedar Grove is registered on the Philadelphia Register of Historic Places and is an inventoried structure within the Fairmount Park Historic District entry on the National Register of Historic Places[xii].

Elizabeth Coates Paschall was a remarkable woman with a remarkable life.  She was educated in business and medicine.  She suffered great sorrow with the death of her six children.  When her husband died she continued the business and was a respected shopkeeper.  She taught the business to her sons, Joseph and Isaac, who were partners in the Philadelphia store called The Sign of the Red Hand-saw[xiii].  Elizabeth not only leaves her mark in time with the “Receipt Book” and Cedar Grove, but with her many descendants as well.