The Youngster Gets Three Years In The Reform School.

Fort Smith, Arkansas – February 22. – Dan Paschall, a 10-year-old boy, was today convicted of murder in Judge Parker’s court.  The crime for which Paschall was convicted was the killing of Arthur Berry at Kreba, L. I.  [Krebra, OK, nickname is “Little Italy.”] Several boys were passing the home of the defendant and threw rocks at him.  This so incensed the little fellow that he took his father’s gun and fired at them, resulted in the death of one of the number.  Judge Parker sentenced Paschall to three years’ confinement in the Reform School, District of Columbia.  He is one of the youngest murderers on record.  Daily Arkansas Gazette, (Little Rock, Arkansas), Thur. Feb. 23, 1893, Page 1, and The LaFayette Sun, (LaFayette, Alabama), Wed, 01 March 1893, Page 3.  No other information has been located for Dan. 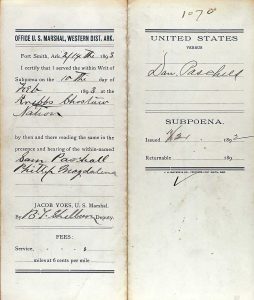 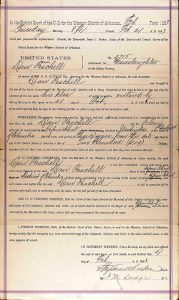