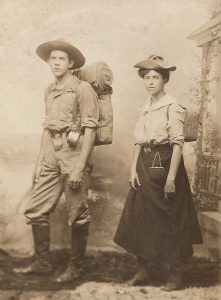 Photo of Benjamin Stuart Paschall with his sister Mary Paschall.  Taken on 25 September 1903 in Seattle, Washington upon completion of hiking from San Francisco to Seattle along the Pacific Coast Trail.  Photo courtesy of T. MacMillan.

New York – Many physicians of this city have shown interest in a treatment for all forms of tuberculosis developed by Dr. Benjamin S. Paschall, formerly of Seattle, now of New York, and asserted by him to be more effective than quinine is for malaria.

Tuberculosis is not thrown off easily by the body as many other infections are, according to Doctor Paschall, because the term manufactures for itself a capsule of wax which gives it a high degree of protection from the natural powers of the blood to digest and destroy germs and other foreign substances.

The problem which confronted him at the beginning of his research in 1907, according to Doctor Paschall, was to find a method of increasing the power of the blood to digest the wax of tuberculosis germs.

The theory which Doctor Paschall finally adopted was analogous to the use of iron as a tonic.  The blood does not digest iron.  But iron, treated with certain acids, makes a compound which the blood can digest.  Doctor Paschall set out, he said, to combine the wax with chemicals into a substance which the blood could absorb.   His object was to cause the blood to manufacture digestive juices which after absorbing this compound, would remain in the blood to break up the expel the wax of the tuberculosis germs.

Dr. Paschall, then, according to his statement, devoted himself to the study of waxes and sent all over the world for different types.  The analysis of the tubercle wax showed that a great many substances entered into its composition.

He produced his first treatment in 1908.  After various experiments on guinea pigs and other animals he became satisfied that he had discovered a valuable therapeutic agency, and his first human patient was himself.  He had been a sufferer from tuberculosis, and he believes that he cured himself with injections of the compound which he had then made.

The theory on which the treatment was worked out resembles that on which salvarsan was developed, although differing in some particulars.  Doctor Ehrlich, who announced his discover in 1910, which a coal-tar compound which stained the parasite which he sought to destroy, but did not stop its activity.  He combined that chemical with arsenic constituents.  This compound, in staining the parasite, released the poison which destroyed its action, without hurting the human body.  This process is reversed by Doctor Paschall, who possessed the latent enemy of tuberculosis in the wax, but had to find chemical combinations which would make it available.  His “mycoleum” differs also in that it is a combination of chemical and bacteriological products, whereas salvarsan is a union of chemicals only.  And, while salvarsan attacks the parasite directly, the mycoleum is supposed to excite the blood to make the attack.

He at first used the treatment only in the case of persons in advanced stages of tuberculosis, who asked for it.  Even in the advanced stages Doctor Paschall claims a large record of recoveries.