Dr. N. J. Paschall – Fulton County, was born May 21, 1840, in Weakley County,  Tennessee, six miles southeast of Fulton.   He is the eleventh of thirteen  children, seven boys and six girls, two boys and one girl now living, born to  Jesse M. and Mary (Freeman) Paschall, natives respectively of Caswell and  Grandville Counties in North Carolina. His grandparents were Alexander and Susan  (Morgan) Paschall, of French descent. The father of our subject came to Weakley County in January 1827, and entered about 220 acres of land, which he improved  and lived on until his death in 1872; he was born in 1799. The father,  grandfather and great-grandfather and mother of subject all lie in the family graveyard on the farm entered by grandfather  Alex Paschall, and now owned by Dr.  N. J. Paschall. His father flat boated in an early day down the Mississippi  River, and was one of the first magistrates of Weakley County. He assisted in  organizing the first court and was appointed justice for life.   At the end of the four years the constitution was changed; he was then elected for sixteen years.  He enlisted to assist in removing the Cherokee Indians, also enlisted in the  Florida War. He was an intimate friend of Davy Crockett.

Dr. N. J. Paschall was  reared on a farm and received a common school education, the best the log-school  of the pioneer days could afford.  He lived with his parents till he was  seventeen years of age, when he commenced the study of medicine with his  brother, G. W. Paschall. He took his first course of medical lectures at  Jefferson Medical College, Philadelphia, Pennsylvania in 1861. After his return  he enlisted in July 1861, in a cavalry company commanded by Capt. Ballentine. He  participated in the battles of Paducah, Corinth, Britton’s Lane, Fort Pillow,  bombardment of Vicksburg, Bolivar, Fort Donelson and Belmont. He re-enlisted  in  the spring of 1862 for three years or during the war, and was detailed at  various times to take charge of the sick. He was  under the command of the  following named generals: Pillow, Forrest and Van Dorn. After the surrender in  May 1865, he  returned home and shortly after emigrated to Kaufman Co., Texas,  where he remained three years. He returned, renewed his study of medicine and graduated at Jefferson Medical College in the spring of 1869. He located at  Fulton, where he has continued his practice ever since with success. He attended  a course of medical lectures at St. Louis Medical College in 1871.

Dr. Paschall  owns 225 acres of land in a good state of cultivation and a drug store, which he has acquired by his own industry.  He was married July 17, 1864, to Sarah J.  Wilson of Ballard County, Ky., a daughter of Rutledge and Elizabeth (Holman) Wilson, natives of Livingston and Butler Counties, Ky. Respectively, of Dutch  descent. Samuel Wilson located in the Purchase in 1820; William Holman in 1823;  both settled in Ballard County. To Dr. and Mrs. Paschall eight children were  born, viz.: Mary B., Sarah A. May F., Demitra A., Newton J., Ed C., Jesse R. and  Lola A. Mrs. Paschall and eldest daughter are members of the Methodist Episcopal  Church. Dr Paschall has been trustee of Fulton several terms. He is a member of  the I.O.O.F. in Fulton, also a charter members of the K. of H. 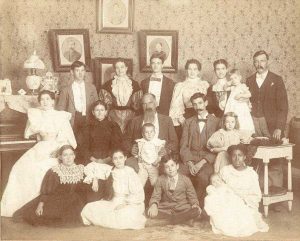 Note:  Sarah Agnes Paschall later married Herschel T. Smith of Ft. Worth, TX.  They lived and died in Fulton.  May and Joseph W. Bennett are the grandparents of Follis Bennett, who currently lives in Fulton.  The Foster family moved to Memphis, TN in 1900.  Augusta Paschall later married Thomas Nelson Fields.  They lived and died in Fulton.  Dixie later married Thomas Merritt Pittman, of Henderson, NC.  They lived in many places, but are buried in Fairview Cemetery, Fulton.  Blue became Dr. James B. Paschall; he married Addie Bowder and had one daughter, Mary B. Paschall Hefley.  The infant, Hazel Bennett later married Dr. Joseph C. Scruggs; she had two sisters, Helen Gould Bennett (Mrs. W. H. McGee), and Mayme Bennett, in addition to a brother Joseph Julian Bennett.  All are buried in Fairview Cemetery.

One thought on “Biography of Newton Julian Paschall”