Fort Sam Houston, Texas – A 350-pound sergeant stepped in front of his class on bandaging.  He rolled his eyes, bounced a couple of times and chanted:  “The roller bandage is so neat, The flannel bandage gives with the heat.  The gauze, of course, lets in the air, with a wound on the head you shave your hair.”

That is the first verse of “The Roller Bandage Calypso,” an Army training aid with a West Indian beat.

The song just came to Master Sergeant William J. Paschall Sr., a former Memphis and St. Louis ” rhythm and blues man,” one day.  He was listening to another instructor teach trainees at Brooke Army Hospital here about the long narrow bandage, how it’s used to keep dressings in place and protect wounds.

“I made a little ditty in my head,” said Paschall, who sometimes is known as “350 pounds of solid sugar” and also as “the melodious medic.”   His supervisor, Lt. John L. Hontales of San Francisco, talked him into singing it during the break between classes.

“Now I use it after each lecture on roller bandages,” Paschall said, “And the trainees sing it with me.  You’d be amazed how fast it caught on — I heard the men singing the song while they were shooting pool at the service club and pulling ‘KP’ in the mess hall.”

Maj. Gen. William E. Shambora, commanding general of the hospital is officially enthusiastic about the calypso.  “We welcome an innovation in our training which makes subjects easier to teach and easier to learn,” He said[i]. 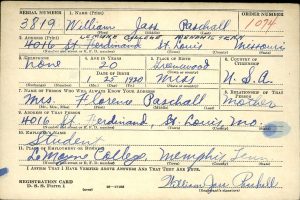 Katheryn Louise Paschall was born June 28, 1924 in Memphis, Tennessee. She was the first of three children born to Jack Bell and Jessie Mae Bell Mack. She attended Booker T. Washington high school and graduated in 1941. She married William J. Paschall Sr. in January of 1942. The couple lived in St. Louis Missouri until the US Army relocated them to San Antonio, TX. in 1956 .

While in San Antonio, Katheryn became a Post Chaplain Secretary at Fort Sam Houston during the late 1950’s. She later was the Youth Program Director for the YWCA Carver Branch in San Antonio and retired in 1973 from Volkswagen Inc. She held many leadership roles for the South West Texas Conference Jurisdiction of United Methodist Women where she held the office of president for two terms. She is a member of St. Andrews United Methodists Church and a former member of St. Paul’s United Methodist Church. She is preceded in death by her late husband, Msgt. William J. Paschall Sr.; and is survived by her four children; William J. Paschall Jr. and wife Ellen, Raphael C. Paschall and wife Charlotte, Renee A. Paschall and husband Johnny Harris, and Jack K. Paschall. She is also survived by seven grandchildren, five great grandchildren and her sister, Evelyn McNeal-Harris. She will be missed by many family and close friends who adored her[v]. 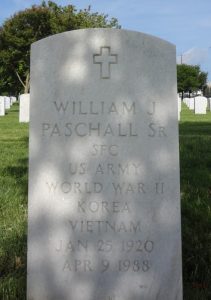 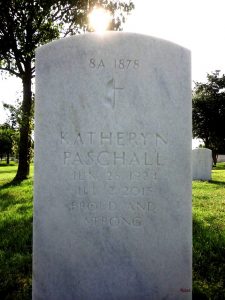