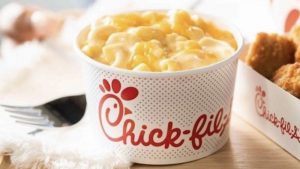 Chick-fil-A has been advertising Mac and Cheese.  Last month my sister and I decided to try it.  It was wonderful.  Best Mac and Cheese I have had in a long time.  But what was so strange, is the taste was familiar to me.  I called my sister and asked, “Why does this taste familiar to me?”  She said, “Because it is Grandma Paschall’s mac and cheese.”  Our grandmother, Ruth McKinney Beard Paschall, always made her sauce with “Rat Trap” cheese, which is a cheddar cheese.   Our grandmother died in 1976, but that taste brought back so many sweet memories.  So if you want to taste some of Grandma Paschall’s mac and cheese stop by a Chick-fil-A.

While the pasta cooks, make the cheese sauce by combining the milk, American cheese, butter, and salt in a medium saucepan over medium/low heat.  Slowly heat up the milk to melt the butter and cheese.  Stir often with a whisk until the American cheese is melted and the sauce is smooth.

Add the remaining cheeses and stir until the sauce is smooth, then remove it from the heat.  Allow the sauce to sit for 10 minutes to cool and thicken, then combine the sauce and pasta in a large bowl and allow it to cool enough that the cheese doesn’t call to the bottom of the bowl.  Gently stir it occasionally as it sits.

Preheat your broiler to high.  Pour the macaroni and cheese into an 8×8-inch baking pan or dish.  combine the yellow and white cheddar cheese from the topping, then sprinkle the mixture over the top of the mac and cheese.  Pop the pan under the hot broiler for 2 to 3 minutes or until the top has lightly browned.

TIDBITS:  If you can’t find BellaVitano cheese, you can substitute with 1 additional tablespoon of Parmesan cheese.  If you don’t have American cheese, you can use Velveeta or any cheese that contains sodium citrate.