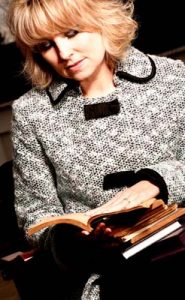 “Janet grew up in a musical family. Her dad and his brothers played bluegrass instruments and sang in churches in neighboring states. Janet’s sister, Kay, played piano and the sisters formed their own gospel-singing group.”  Read Janet’s complete bio on her website at https://www.janetpaschal.com/

Not only is Janet beautiful, talented, and loves the Lord, she is also a double Paschal.  William Paschal (1704-1774) of North Carolina is not only her 7th great grandfather, he is also her 8th great grandfather.   William and Reliance’s first son Samuel had a great grandson also named William.  William and Reliance’s fifth son Elisha had a granddaughter named Nancy.  Nancy and William, 2nd cousins once removed, married on 14 January 1840 in Caswell County, North Carolina.  It was common practice for cousins to marry in the 1800’s. William and Nancy would raise nine children.

In May 2019, Janet was inducted into the Gospel Music Association Hall of Fame in Nashville, Tennessee.