Fulton, Ky., June 20, 1906 – As Miss Emma Hopkins and Fred Paschall, prominent young people, were returning from a visit in the country their horse suddenly commenced kicking.  The buggy was badly damaged.  Mr. Paschall was kicked on the leg and Miss Hopkins was kicked on the hip as she leaped from the buggy.  The young lady is suffering considerable pain, but no bones were broken[i].

Fred Paschall and Emma Hopkins were first cousins, once removed.

Gemma “Emma” Holmes Hopkins was the daughter of Martha “Mattie” Paschall and John Barnard Hopkins, and the granddaughter of Dr. Gideon William Paschall and Frances Adaline Bullock, was born 28 January 1887 in Fulton Co., KY, died 20 May 1948 in Grandville Co., NC, and was buried in the Elmwood Cemetery in Oxford, Grandville Co., NC[ii].  She married Leonard Bullock Fleming on 11 August 1918 in Shelby Co., TN[iii].

Alfred “Fred” Newton Paschall was the son of Perry Poyner Paschall and Ruth C. Wood, and the grandson of Jesse Morgan Paschall and Mary Freeman, was born on 30 July 1874, died on 17 January 1963 in Memphis, Shelby Co., TN, and was buried in the Fairview Cemetery in Fulton, KY[iv].  He married Mary Hettie Fields on 25 July 1906[v]. 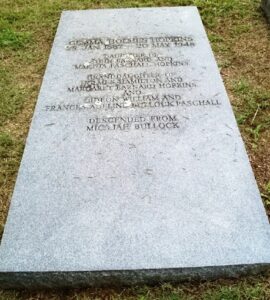