A neighbor called the Paschall’s and told them the bad news.  Paschall rushed into the burning home and emerged triumphant, not with the turkey but with a paper bag.  It contained $5,000 in cash Paschall had secreted in his home.  The turkey was reduced to charcoal.

The Paschall’s ate out, which cut an insignificant dent in the $5,000.  Damage to the house was confined to the kitchen[i].

Dean Cameron Paschall, the son of William Guthrie Paschall and Lorene Litterel, was born 6 August 1922 in Los Angeles Co., CA, and died on 29 April 2004 in Long Beach, Los Angeles Co., CA.  He was cremated with his ashes scattered at sea[ii].

For the ceremony the bride chose a bridge wool suit trimmed with brown braid and brown accessories.  Her corsage was a spray of green orchids.  Attending the bride was Miss. Audrey L. Hergrandson who wore a grey suit with pink accessories and a corsage of pink roses.  Robert Powell was best man.

The bride, a graduate of Mansfield Senior high school was graduated from Long Beach Polytechnic high school and Long Beach Junior college.  She is now attending the University of Southern California.

Mr. Paschall was graduated from City College and at present is associated with his father in Meyer and Welsh, Inc. in Los Angeles. The couple resides at 6914 Rugby avenue, Huntington Park, Calif[iv].

Wayfarers’ Chapel Setting for Paschall-Hulbert Rite:  In a morning service at Wayfarer’s Chapel, Portuguese Bend, Dr. D. Cameron Paschall took as his bride, Audrey L. Hulbert, daughter of the late Mr. and Mrs. A. A. Spurgeon.  The bridegroom is the son of Mr. and Mrs. W. G. Paschall, 2225 Pasadena Ave.

The bride wore a gown of pink silk organza and a pale pink veil.  She carried a nosegay of pink roses.  Mrs. Julius Smith was matron of honor, and Valerie Jean Hulbert was junior bridesmaid.  Dr. John P. Martin served as best man. 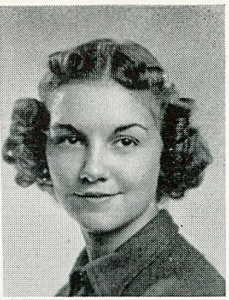 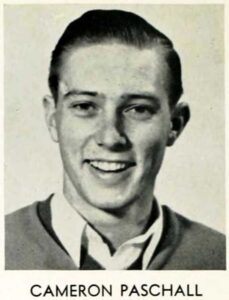