The French surname Paschal derived from the Hebrew word pasakh indicating the Passover, a festive day when it is said that “God passed over” the houses of the children of Israel.  In England, the name was associated with Good Friday.  Boys born on that day were often given the name Paschal.  The name became a favorite in France where Pascal was a noted philosopher.  As Pascoti, it was the name of an Italian poet.

There is a slight difference in the armorial bearings confirmed to the noble and honored Pascals of years past, all of whose coats of arms contain the words ” … un agneau pascal … ” meaning a paschal lamb.

The lamb became the symbol of Christ frequently used in manuscripts and paintings of the fourth and fifth centuries.  The banner bearing a lamb signified the Resurrection, the cross emblazoned banner being the sign of triumph.  This symbol became decisive influence in the expression of the Easter liturgy until a synod of church officials meeting in A.D. 692 in Trullo passed legislation forbidding the representation of the paschal lamb as a symbol of Christ.  The reasoning for this act being that the symbol was becoming misunderstood, the people imagining that Christ in the Incarnation has assumed this form.  Truth required the use of human image of Christ and the lamb was relegated to secondary importance thereafter.

Paschal is the mour literary spelling of the name taken directly from the Latin ‘paschalis’ … more commonly spelled Pascal in France.  Paschal was the name assumed by three early Popes.  These included Paschal I, Pope from A.D. 717 to 824 … Pope Paschal II, 1099 through 1118. known for his conflict with Henry I of England and emperors Henry IV and Henry V of the Holy Roman Empire.  Paschal III, the anti-pope, opposed Alexander III forcing him to seek refuge in France in 1162. 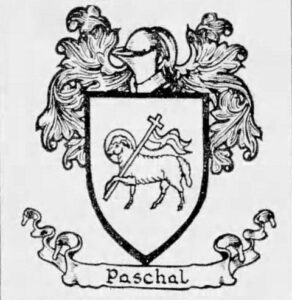