EXCITING NEWS!    The John T. Paschall Book is Finally Here!  Give your family the gift of their heritage. 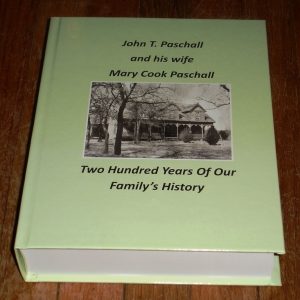 The book was entered in the writing award contest for the Texas State Genealogical Society in 2018.  It won 1st Place in Category I – Books by Non Professionals. Bill Buckner with the TSGS said, “The book has certainly raised the bar of how a family history should be written.” The John T. Paschall book will be permanently housed at the Ralph W. Steen Library, Stephen F. Austin University, East Texas Research Center.

The hard cover book cost $75.00 plus shipping and tax.  It is available at the book store of Kemp and Company at https://www.kempcosolutions.com/product-page/two-hundred-years-of-our-family-s-history-by

The book John T. Paschall and his wife Mary Cook Paschall, Two Hundred Years of Our Family’s History by Linda Clark Stewart, is a valuable genealogical reference book for your library.  The book begins with the birth of John in 1797, and covers 200 years and over seven generations in the life of the Paschall family.  The book is unique as it chronicles the family’s journey from Tennessee to Texas, acquiring land and building homes in the early 1850’s, their participation in the Civil War and life during the reconstruction period, the turn of the 20th century, World War I, the great depression, and World War II.  During these years, the Paschall’s served their communities as farmers, blacksmiths, post masters, mid-wives, newspaper writers, judges, county commissioners, and Texas Rangers, just to name a few.

The book has over 6,000 cited sources, and over 340 pictures of family members, tombstones, marriage licenses and other legal documents.  It also has a copy of John T. Paschall’s signature and some of his children’s signatures.  The book features copies of the land grant patents that the Paschall’s received from the State of Texas, as well as maps showing the location of the land.  Latitude and longitude coordinates are given of the communities where they lived, as well as coordinates for some of the abandoned cemeteries where they are buried.  In addition, the cause of death is recorded in the book giving valuable medical history on the family.

You will read wonderful family stories, as well as a newspaper article about a UFO crash in 1897 in the Texas town where some of the Paschall’s lived. You will meet Frank Hamer, the great grandson of John T. and Mary, who along with his brothers became Texas Rangers.  Frank lead the posse that captured Bonnie and Clyde with Frank shooting Bonnie. Then read about John T. and Mary’s granddaughter Emily Paschall who married William H. Dool.  William became the first warden of the Redwood National Park in northern California.  He created the trails and camp sites in the park that are still used today.  Finally, the mysterious identity of Susan Paschal, who was killed in the Montague Indian Raid in 1870, will be revealed.

The 970 page book is indexed.  It contains 6,246 names, with the names documented with primary and secondary sources such as birth and death certificates, probate records, obituaries, cemetery records, census and tax records, land and court records, newspaper articles, pictures, letters, and family stories and data.