Article submitted to the Paschal-Paschall Oral History Project by Jerry Wolfe, edited and cited by Linda Stewart, 11 February 2020.  All documents and pictures are courtesy of Jerry Wolfe.

William Paschal and his wife Reliance Dennis had a son named Samuel (Line D).  Samuel (senior) had a son (junior), grandson, great grandson and nephew, all named Samuel, as well as a another nephew named Samuel Dennis.  With the absence of middle names, researching the Samuel’s can be confusing.  In this paper William’s son will be referred to as Samuel I.  The subject of this paper Samuel junior will be referred to as Samuel II.

Samuel II, one of thirteen children of Samuel Paschal I and Phereba Ward, was born on 28 December 1775 in North Carolina.  It is not known as to the exact date of Samuel II’s death other than in the spring of 1812 in Jasper County, Georgia.  The time of year, as well as the year, was derived from the appraisement of his estate and the date 15 May 1812 listed on the papers[i].

Samuel II married Elizabeth Leverett  before 1794 in Wilkes County, Georgia, where he owned the same 85 acres that his brother William had earlier deeded to their father Samuel Paschal I.  After Samuel Paschal I returned to South Carolina, Samuel Paschal II owned the same land[ii].  He participated in the second land lottery in 1807 and received 202.5 acres.  Samuel II sold the 85 acres to Jeremiah Sanders on 19 December 1807, and moved to what is now Jasper County, Georgia[iii].  After paying a grant fee of $12.15, he received a land grant from Jared Irwin, Governor of Georgia, on 28 September 1808[iv].  In addition to Samuel II, three other Paschal men also participated in the land lotteries: George, William, and Thomas.

In less than three months after the conclusion of the 1805 lottery, the U. S. purchased 2.2 million acres from the Creek Indians. The 1807 second land lottery was structured almost identically to the first, continuing the district and land lot survey system and repeating the use of a land lottery to distribute the land[viii].

In order to qualify for the lottery, Samuel II had to be a free white male twenty-one years and upwards, and an inhabitant of the state of Georgia twelve months immediately preceding the passage of this act. He had to paid taxes, have a wife and one or more legitimate children, to receive two draws[ix].

Georgia, Wilkes Co. We the Justices of the Inferior Court viz: Benjamin Porter, James Anthony, Thomas Mounger and Richard Worsham having met the 13th day of June 1803 at the court house agreeable to the Governors Proclamation for the purpose of receiving the names of the inhabitants of the county and the draws to which they are entitled by an Act of the General Assembly passed May 11, last, Do hereby certify that the persons hereinafter named are entitled to the number of draws designated by the figures one and two opposite their names, viz: [Page 317] Thomas Paskil (1), William Paskil (2), [Page 318] Samuel Paskil (2)[x]. Another record shows George Paschall (1), William Paskell (1), Samuel Paskil (1), Thomas Paskil (1), and William Paskil (1)[xi].

Samuel II, who lived in the Wellborn District of Wilkes County, drew Lot 122, 13th District in Baldwin, the portion that was later Randolph County (Not to be confused with the present day Randolph County) now Jasper County, Georgia.

At the age of 37, Samuel II died in 1812, leaving Elizabeth and their eight children: Keziah, Matilda, Mahala, Elizabeth Betsy, Fereby, Samuel III, Nancy, and James Monroe [xiii].  He was buried on the Lot 122, which he received in the land lottery. There is no marker, other than fieldstones, and his appears to be the only grave. After Samuel II’s death, Elizabeth married Benjamin Reasons [Rezin] on 21 December 1815 in Jasper County, Georgia[xiv].  They moved to Gwinnett County, Georgia.  Benjamin supposedly died in 1822, and Elizabeth died in 1847.  She was buried in the Holt-Juhan Cemetery in Centerville, Gwinnett County, Georgia[xv].

Lot 122 looks much the same as when Samuel II Paschal lived there. The lot is about 11 miles south of Monticello, Georgia and the roads are still dirt. Leaving Monticello and driving south on Highway 11, Greer Road slants off the highway to the left. Greer Road is a dirt road with lots of potholes. It passes through timberland without houses for several miles. Lot 122 lies on both sides of Greer Road immediately after the intersection with Old Agateville Road, mostly on the left. Immediately after passing the intersection of Old Agateville Road a tributary of Cedar Creek crosses the lot.

In 2010, Jerry Wolfe, a descendant of Samuel II, accompanied Mr. Matthews who owned a portion of Lot 122. They went to his house and he showed him one pile of rocks in his front yard that he believes to be a single grave. Jerry believes this is the grave of Samuel Paschal II. While he cannot prove it, he is satisfied that it is.  While Mr. Matthews gave Jerry permission to erect a marker, before the marker was placed, he died and the land changed owners.  The new owner was not open to a marker, or communication about the grave or the marker. 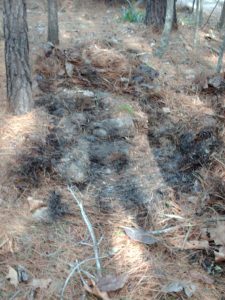 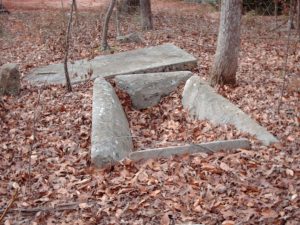 Samuel II’s land, Lot 122, is located at the point of the torn section of the map. 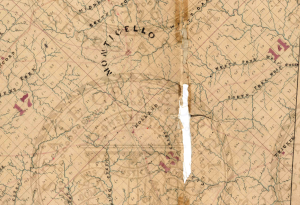 The subject of this paper, Samuel II, Paschall ID= Dc (1775-1812), should not be confused with his first cousin Samuel Dennis, Paschall ID= H2 (1775-1822), who also lived in the same area in Georgia.  For further information on both men, click on the “notes” at the end of their entry in the database.  Clarence McDaniel has 34 citations and notes on Samuel II’s life, and 28 citations and notes on Samuel Dennis’ life.

Directions to the Holt-Juhan Cemetery – Leave 78 E onto Rockbridge Rd. to the left near Stone Mountain, take N. Deshong Rd., after a very few feet; turn left onto South Rockbridge Rd. Drive a short distance and turn right into Rock Place Subdivision, make no turns other than those required to proceed. The Cemetery is on the right joining 5325 and separated from the house lot by a roll of evergreen trees.  The cemetery is badly neglected.  Crude tombs have the names of Holt, Juhan and Leverett.  The list of names from the Gwinnett Historical Society is the best source of knowledge of those buried in the cemetery.  The large tomb of Elizabeth Leverett Paschal Reason had the top shoved aside.  My last time to the cemetery, I could not enter due to the brush.

When was Elizabeth Leverett Paschal Reason born?  There is a note in a file at the Gwinnett County Historical Society that states she was born in 1764, in Ireland, and died in 1847.  The information found in “Gwinnett County, Georgia Deaths 1818-1989”, page 576 stated “c.1764 in Ireland 1847 83 years old.”  Were the dates transcribed from the tomb stone? There was an article printed in the Gwinnett Home Weekly, 3-21-1991 that was reproduced entitled “Historical Cemeteries are published following 17 year search”. In the article are the following words, “In tracking the names and dates of the people listed, many different sources were used, said McCabe [McCabe, Alice Smythe, ed. “Gwinnett county, Georgia Families 1818-1968”, Georgia: Cherokee Publishing Company, 1980. p. 576.]

I have seen one side of the tomb thought to be hers and no legible writing is there.  Apparently the grave had been dug out by grave robbers and the top left upside down.  Since it is upside down, I have never seen the inscription that is often referred to in documents that says Elizabeth was born in Ireland.  One deals with folklore when tombstones are erected long after the death of a love one.  The earliest document that I have found in my Leverett family history was in 1685, Virginia, and the family was already well established in America. 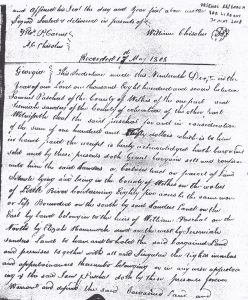 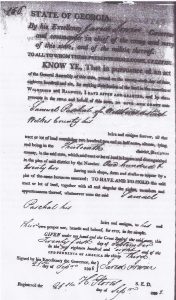