Written by Lonnie F. Paschall, submitted by Edythe Paschall, 27 May 2020 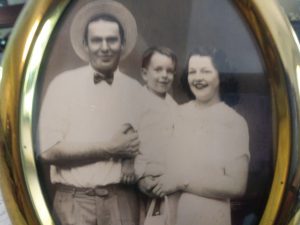 Our Paschall family is of Huguenot stock. The family belonged to the nobility of the French province of Auvergne. Our ancestors were driven out of French before the Edict of Nantes in 1598. The family fled to England. This is corroborated by the old family Bible which was printed in English in 1599. This Bible was brought to America in 1681 by Thomas Paschall. When the family moved to England they changed the spelling from French to the PASCAL to the Middle English spelling to PASCHALL.  Today many of our relatives have dropped an L from the name, spelling it PASCHAL, and a few spell it PASCALL.

Thomas Paschall, who was born in Bristol, England, purchased land from William Penn, booked passage for himself and his family aboard the “Society of Bristol” and landed in Philadelphia in 1681. Thomas brought with him to Philadelphia his wife Joanna Sloper and three children; William, Thomas, and Mary. They were one of the first families of Philadelphia. There is a Paschall Avenue in Philadelphia and there is a Paschall Station U.S. Post Office in the city.

This is from a letter written by Thomas Paschall of Philadelphia in January, 1682:

“I have Venison of the Indians very cheap; We had Bear flesh this fall for little or nothing,  it is good food, tasting much like beef. ”

Thomas’s son William operated a silversmith’s shop in Philadelphia. Many Huguenots were silversmiths or deft artisans in other trades. Paul Revere is America’s most famous Huguenot silversmith.

In 1825, Ann Tuggle Paschall with her children moved to West Tennessee and settled on a 64 acre farm in the Northwestern part of Henry County, Tennessee near Jones Mill. The Paschall Cemetery is located on this farm. The first to be buried in this cemetery were two negro slaves Ann had brought with her from North Carolina. Members of the family and relatives are still being buried in this cemetery. Most of the land of this 64 acre farm still belongs to members of the Paschall family.

Confederate Captain John Dill Paschall is buried here. Captain Paschall, who lost his right hand at the Battle of Franklin, returned home from the war and raised eleven children. Two of his sons, Dr. Adolphus Paschall and Dr. Elisha Bertram Paschall were physicians in Henry County.

In 1950, Walter Bearden Paschal of Oklahoma erected a large granite monument in the Paschall Cemetery dedicated to “All the Paschal’s who are now on earth, to all those who shall come when we are gone, and in memory of those who are dead”.  Walter is the son of Captain John Dill Paschall, the grandson of Elisha Paschall and the great-grandson of William and Ann Tuggle Paschall.  To Walter we owe much for his work and expense on the family history. He is buried in Oklahoma City.

I believe that my great-great-grandparents, Aquilla Paschall and Margaret Paschall are buried in the Paschall Cemetery. Both were born in North Carolina. They were cousins, both having the last name Paschall. There is no documented proof of who Aquilla and Margaret Paschall’s parents are but most of who have worked on the history believe Aquilla to be the son of Joshua Paschall of North Carolina and a distant cousin of his wife Margaret. Margaret and Aquilla were married in Henry. County, Tennessee on April 20, 1842.

James Hicks Paschall, my great-grandfather was born in Henry County in 1845 or 1847. He married Cordelia Corum and after 1870 they moved to Grainger County in East Tennessee where my grandfather, Lonzo Elisha Paschall was born on June 14, 1880. James was a carpenter and cabinet maker by trade. I have on my possession a brace and bit, and a plane that belonged to Jim Paschall. About 1887 the family moved to Murfreesboro in Middle Tennessee where Jim worked in a furniture factory for about a year. About 1888 the family moved back to Henry County. Jim Paschall became crippled and confined to a wheelchair but he continued to work making cane bottom chairs by hand.

When the great depression started Lon and Robert were working for the Jackson Power, Light & Railway Company at the old power plant on. South Royal Street. When this local company was bought by Phoenix Electric they worked for Phoenix constructing a power line from Jackson to Humboldt, Tennessee and later constructing a power line from Memphis down through the Delta of Mississippi for Mississippi Power & Light Company. When the line got a few miles south of Tunica, homesick, my father talked his dad into quitting and going back home.

They came back to Jackson during the darkest days of the depression. My dad said you could not buy a job. Lon Paschall told his son, “We will make us a job. ”  With money from a silent partner, Mr. W. J. Hall of Hicksville, Lon and Robert went into the poultry business, using Robert’s Model-T Ford to haul chickens and eggs purchased from farmers along the Tennessee River back to Jackson and to sell this poultry to local businesses.

In October 1936, Robert married Valeria Ivey. They had three children;  myself and my two sisters, Bobbie Sue and Valeria Kay (Vicky).

In about 1940, they moved their businesses into a new building at 1338 Highland Avenue next to the Hut Restaurant. Lon had to give up his filling station in 1946 when the store was moved from 1338 Highland Avenue to the Jones Building at 1301 Highland. From 1946 until two days before his death on December 14, 1957 Lon worked for his son in the grocery store.

Robert, crippled for most of his life, continued to operate his grocery business until his death on August 22, 1965. We closed the business a year later. 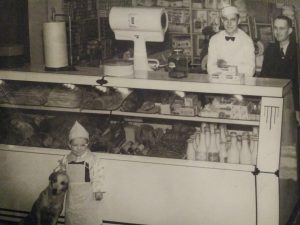 Lonnie Paschall age 2, his father Robert “Bob” Paschall, and a Kraft salesman.  Lonnie’s mother, Valeria Paschall made Lonnie’s little apron and cap for this picture. A copy of the picture was published in The Jackson Sun newspaper in 1939.

SOME PASCHALLS by Rosa Lee Prince Paschall, copy in the Tennessee Library and Archives, Nashville, Tennessee.

Note: My husband, Lonnie Paschall wrote this article. I lost him last February 23RD 2019. I now live in Paris. My daughter Molly Hope is a French teacher at Henry County High School.