For anyone who is doing genealogical research on ancestors that served in the War Between the States, or is a Military History buff “Reminiscences of the Boys in Gray 1861-1865” by Mamie Yeary is a must have for your library.  The book was originally published in 1912, and a reprint of this 948 page book is available through Amazon in two volumes.   A digital copy of the book is available online through The Portal to Texas History  at https://texashistory.unt.edu/ark:/67531/metapth29786/ 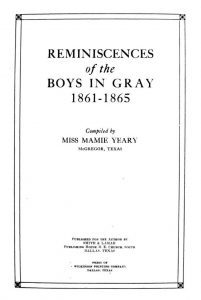 The editor Mamie Yeary, took three years to conduct interviews, and received letters from hundreds of veterans who fought and survived the Civil War. The entries found in this book provide great insight from the men who actually fought in the war.  Mamie Yeary made great efforts to capture their “reminiscences” before this generation of men passed on.

Per Bob Carpenter’s review of the book … The book gives first-hand experiences of those who were there. Some of the entries are actually funny, not all serious. The entries are from veterans living in Texas at the time the recollections were gathered, but many of the men were from other parts of the country and fought in many places during the war.  After all, there was not a great deal of fighting actually on Texas soil. In other words, this is a great book for research, even if you are looking for information in other areas of the war. I highly recommend it for research or personal interest.

We owe a debt of gratitude to Ms. Yeary for her dedication in writing this book.  Here is one of the thousands of entries that is in the book.

J. D. GAINS. Texarkana, Tex. — Born Nov. 26, 1845, near Walton, KY. Enlisted in the Confederate Army, March 8, 1862, at Memphis, Tenn., as private in Company D, Forrest’s regiment, Armstrong’s brigade, Army of Tennessee; Jesse A. Forrest, first Captain, and N. B. Forrest, first Colonel. served with Johnston at Shiloh, and for a while under Price and Van Dorn in Mississippi, and then under Forrest and Bragg in Tennessee, until captured.  Was taken prisoner near Kelley’s Ferry, Tenn., Sept. 10, 1863.  Sent first to Camp Chase, Ohio, and afterwards to Rock Island, Ill.  was in the battles of Shiloh, Iuka, Corinth and various small skirmishes in North Mississippi, Alabama, West Tennessee and Middle Tennessee.  The old Forrest regiment was reduced to a battalion, and was known as McDonald’s Battalion.  My last Captain was John C. Blanton, a preacher, who is still living near Tupelo, Miss.  I reached Richmond, March 12, 1865, on exchange, but never reached my command, which was at that time in the neighborhood of Selma, Ala.  Crossed the Mississippi River about April 10, 1865, to Chicot County, Arkansas, and the war ended before I could get to Kirby Smith’s command.  Then returned to my home in Kentucky, and moved to this place in February, 1881, where I have since resided.

John Dudley Gaines, the son of Archibald Kincaid Gaines and Margaret Dudley, and husband of Mary J. Collins, died in Texarkana on 6 March 1925, and was buried in the State Line Cemetery in Texarkana. 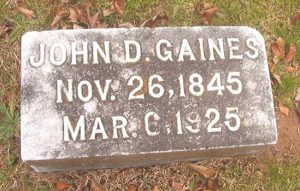