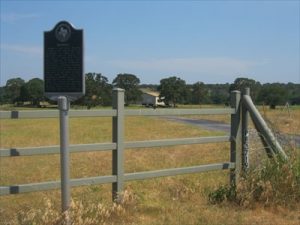 Marker Text:
Robert A. and Molly Paschall settled in this area in 1876 and purchased 160 acres of land near Salt Creek in 1890. In 1902 the Paschall, Texas post office was established in their home which also housed the Paschall-Cottondale Telephone Company. The community of farm families which settled in the surrounding area built a one-room schoolhouse enamed Gravel Hill, and founded a Sabbath school, literary society and Farmers Alliance. The community declined in the early 20th century. The Paschall family has lived in the area for six generations. (1997)

During and after the Civil War, efforts to settle Wise County had crumbled with Indian raids jeopardizing outlying settlements until 1875 when the last raid occurred. Wise County had been a frontier county for twenty years.

Settlers heading West into the county in the 1870’s must have feared they had reached the end of the earth. They had reached a vague but important line of demarcation, the farming frontier where the familiar woodlands gave way to prairie and cattle ranching in the western part of the county. They had also reached another invisible boundary, the cultural edge of the South where few if any social organizations existed.

It was into this disorganized and sometimes hostile place that Robert Alexander Paschall and his family migrated from Tennessee in 1876. Robert was born in Tennessee in 1853, the eldest son of James Anderson Paschall and Sarah Annie Marshall. He married Molly Dill in June 1876 and they accompanied his parents and his five brothers and two sisters to Wise County. Arriving by train in Ft. Worth, the launching point for westward migration, they then traveled by wagon to Wise County.

James Anderson settled in the southwestern part of the county in what would become the Bethel Community. Robert and Molly farmed land near the Tarrant and Parker County line until 1890 when Robert bought 160 acres of unimproved land on Salt Creek four miles south of where his father lived. While staying with his father, he walked four miles both ways each day to his land to build the first house on the site which would later be known as Paschall, Texas.

Southwestern Wise County was the last area of Wise County to be settled, being some twenty miles from the county seat at Decatur. It still lacked any social organization in 1890. Settlers coming into the frontier had responded to disorganization as they had in their old homes by forming associations of farmers and stockmen and social institutions, including schools and churches. So it was here.

The basic need was for a school. Robert and Molly now had six children. Robert and his neighbors built a one-room school on bordering land, which was to serve all the community. It was supported by donations only and teachers were boarded in the Paschall home. It was called the Gravel Hill School.

Robert also helped organize the Gravel Hill Sabbath School and taught Sunday School there. An “Alphabetical Register of Officers, Teachers and Scholars’ of 1899 lists 137 individuals who were in attendance.

In a frontier county having few institutions to create a community, the Farmers Alliance came to play an important role. It gave the men a common cause for assembling. A sub-alliance was organized in the community and in 1893 Robert became secretary of the Wise County Farmers Alliance, consisting of some twenty sub-alliances.

With the growth and organization of the community came the need for a post office. There was no rural delivery, and it was necessary to travel six miles to the nearest post office to pick up mail. The community petitioned for a post office and on May 13, 1902 the Paschall, Texas post office was established in the home of Robert and Molly. One end of a porch was enclosed to hold the boxes, and about 30 families from a three-mile radius picked up their mail here. It served the community until rural delivery began in 1904, and the post office was moved to Poolville. Paschall, Texas appeared on Texas maps as late as 1913.

Robert was also instrumental in providing telephone service to the area when he helped organize the Paschall-Cottondale Telephone Exchange in 1905. Stock was sold at $2.00 per customer and 35 families were served. This exchange was also housed in the Paschall home and served the area until 1910.

Robert and Molly lived on the land until their deaths. Robert died in 1917 and Molly in 1940, both at home. They had reared 11 children.

The Paschall land has been owned and occupied by the family continuously since it was purchased in 1890. It now is the home of L/Col. Jim B. Paschall, USAF Ret. Also residing on the land are his son David Lewis Paschall, grandson Riley Alexander Paschall. Jim’s daughter, Terry Paschall Holland, lives on the actual site of Paschall, Texas in the fourth house to be built there. Five generations of Paschall’s have called the former Paschall, Texas home.