Remembering Texan Samuel Paschall (Eli, James, John, William), who were among the 900 men who fought for Texas independence from Mexico on April 21, 1836.  The battle of San Jacinto was the concluding military event of the Texas Revolution. 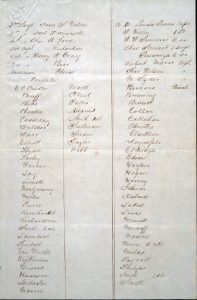 Note: His name is spelled Pascall, Paschal, and Paschall on the documents.

PASCHALL, SAMUEL–Born in Tuscumbia, Franklin, Tennessee December 8, 1815 and moved at an early age with his parents to Sommerville, Tennessee. In 1835 he emigrated to Little Rock, Arkansas. On January 28, 1836 he arrived at Velasco [Texas] on the schooner Pennsylvania, having been recruited for the regular army of Texas by Captain Amasa Turner in New Orleans. He was issued Bounty Certificate No. 548 for 960 acres of land December 27, 1837 for having served in the army from February 13, 1836 to June 30, 1837. He was in Captain Turner’s Company at San Jacinto and on May 26, 1838 was issued Donation Certificate No. 227 for 640 acres of land for having participated in the battle. He received a Headright Certificate, dated January 18, 1838, from the Harris County Board of Land Commissioners for one-third of a league of land. This was lost and duplicate No. 402/501 was issued October 19, 1840. In the duplicate it is not stated when Mr. Paschall came to Texas. He sold the certificate July 19, 1847 to Jacob De Cordova. Mr. Paschall could not, at that time, write, but affixed his mark to the deed of transfer. (Milam County First Class Headright File No. 657 in the General Land Office.)

Mr. Paschall settled at Houston and engaged in his vocation of cabinet maker and carpenter. He was married to Bridget O’Reilly at Houston, September 21, 1839. At a convention held on the San Jacinto Battlefield April 21, 1860 General Sam Houston was endorsed for President of the United States as “the peoples candidate”. Isaac L. Hill, a San Jacinto veteran, was elected president of the convention and among the vice presidents chosen were the following who had served under General Houston at San Jacinto: Samuel Paschall, Ellis Benson, Andrew Montgomery, William S. Taylor, William Dunbar and David H. Love.

Mr. Paschall died June 6, 1874 while a member of the Texas Veterans Association. He is buried in Saint Vincent’s Cemetery, Houston, in a marked grave. Mrs. Paschall’s date of death is unknown. Children of Mr. and Mrs. Paschall were William, Samuel and Sarah Ann. Edward Early, a grandson of Mr. Paschall resided in Herndon, Virginia. 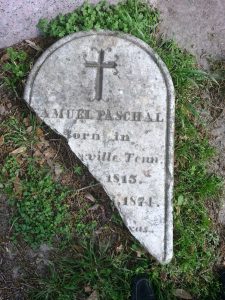 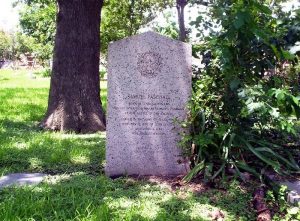