PASCHAL, Franklin Lafitte, was born at Lexington, Oglethorpe County, Georgia, January 15, 1810, and came to Texas in 1836 to fight in the Revolution.  As lieutenant in Major Augustus Parker’s Company, formed at Rome, Georgia, Paschal entered the Texas Army, and soon became commissary of Green’s brigade.  Later he joined Captain Jack Hays’ command, and while on scouting duty near San Antonio was ambushed and seriously wounded.  Returning to Georgia for treatment, Paschal came back to Texas in 1839 and settled at San Antonio.  He was a man active in his community, service as Bexar County’s first sheriff during the Republic, a member of the City Council, City Tax Collector, and as crier of the United States District and circuit court.  Meanwhile, he had represented Bexar County, in 1843-44, at the Eighth Congress, House of Representatives.  Three months after the session ended, Franklin Paschal was married to Miss Frances Roach of South Carolina, this marriage on May 13, 1844, being the first American marriage performed in San Antonio.  Some forty years later, on February 13, 1884, Pascal, still a resident of San Antonio, died of pneumonia.  — See Chabot, With the Makers of San Antonio, 315-7; Election Register, 1843-45; Texas Veterans, 91;  House Journal of the Eighth Congress.

Reprinted From the “Biographical Directory of the Texan Conventions and Congresses 1832-1845”. 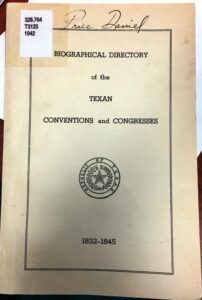 One thought on “The First American Marriage In San Antonio, TX”