Under ideal conditions it would be about as easy to sight one of the tracks as it would be to trail a Sherman Tank across a golf course.  They are big –outlandish–like a human foot that just kept growing for laughs.

But a lack of ideal conditions–or even minimal conditions, for that matter–is one of the obstacles of tracking this thing, Bigfoot, a legendary wild man of the forest lands of the Pacific Northwest.  Some people believe it is not legendary however, but real.

Bigfoot, real or legendary, has been striding through American history for more than a hundred years.  Some of the first white settlers in the area spoke to him.  But the Indians preceded them with their tales of Sasquatch, a man-like creature, mostly used by Indian parents to frighten their children into obedience.

Sasquatch, in a coastal Indian dialect, means big foot, but some historians believe the Indians only referred to the track of the grizzly bear, and not a mythical man creature.

Jess Paschall, a plumber living in Rickreall, has entered the argument over the Bigfoot controversy.  He’s on the side of those who believe that an ill-smelling, elusive humanoid, actually exists.

Before moving Rickreall, Paschall lived in northern California where he hunted all kinds of game.  When later hunting the elusive Bigfoot, he said he traded on this acquired knowledge of tracking and animal responses.

Today, summing up his feelings about the man-animal, Paschall says, “I don’t know what it is or even what it looks like.  But I am convinced that Bigfoot exists.”

Paschall says that his belief in the existence of Bigfoot marks a turnabout in his earlier thinking.  His acquaintance with “it” began approximately 9 years ago in the Marble Mountain wilderness in California.

At that time, Paschall says, he was a friend of a road contractor who had received a contract to build a logging access road to the edge of the wilderness.  In the newly scraped dirt of the roadbed one morning, the contractor discovered a set of large foot tracks as the men assembled to begin work.

But in addition to the huge footprints, measuring 17 1/2 inches long by 8 inches at the broadest point, the contractor noted a significant act of “looting” at the construction site.  A tire from a piece of road equipment had been thrown–not rolled–over the lip of the road, and a filled 55-gallon drum of diesel oil was given the same treatment.  (A drum of diesel fuel weights approximately 500 pounds).

The contractor staked off one of the footprints at the campsite and posted a man to protect it while he drove to the nearest town for some plaster of paris for a casting of the print.  Paschall, since he was a friend of the contractor, later received a cast of the footprint taken from the original on at the road camp.

“It was about three years later that I actually went out looking for Bigfoot,” Paschall said.  “Some of the things we did were to set camera traps in various areas we thought might be used by him.”

The traps netted a variety of photographic glimpses of animal life, as well as one surprised hunter, but nothing of Bigfoot.

In his searches in the California forests Paschall claims to have found many examples of Bigfoot’s spoor, and even experienced one whiff of him, which, in Paschall’s words, “was horrible but I can’t quite pinpoint the odor.”

The near-sighting came one evening when Paschall and two companions, armed with rifles and equipped with small 2-cell flashlights, were on a stalking expedition.  According to Paschall, first came the indescribable odor and later the sound of treading through the waist-high snow brush below them.

Snow brush is described by Paschall as a thick tangle of undergrowth that is extremely difficult to walk through.  It is a growth that bears crash through and deer traverse in a series of high leaps.  Yet the sound he claims to have heard that night was the unmistakable, measured tread of something striding through the brush.

While listening to the sound of the striding below, which was beyond the range of the flashlights, Paschall decided to test the creature’s reflexes.  He sucked in a huge breath and then cut loose with a loud scream.  He later reflected that the reflexes of the thing making the noise seemed to be under better control then those of his surprised companions–they bolted while the crashing stride from below continued unbroken by the sudden shout.

“I felt that if it had been a bear or deer,” Paschall said, “the sudden should would cause it to either freeze or flee.  It doesn’t prove anything that neither of these actions were taken, but it does indicate to me that this was not the normal reaction of animals I have had dealings with.”

Paschall has seen several examples of Bigfoot tracks, he claims, as well as a few attempts of what he believes to be deceptions made by someone pressing a large footprint into soft dirt.

“The way to tell the fakes,” he said, “is to notice that they never go up or down embankments.  They are always on level ground.  The reason for this is that when a person climbs or scrambles downward, his foot digs into the dirt in peculiar patterns, and it’s too difficult for anyone to try to fake such a print.”

Besides the footprint of Sasquatch, which he says has taken 54-inch strides on level ground — about 20 inches more than the normal man — he has observed the indentations of what appears to him to have been a female and a youngster sitting in the sand by a creek.  It was also on a sandbar by a creek that he saw some tracks on Bigfoot as he had walked under a projecting log, narrowly missing the trip wire of one of his camera traps.

“Those, particular tracks,” Paschall said, “are perfect examples of genuine prints showing the way a foot is twisted and the toes dug into the sand as a person would bend underneath a log, step through, and then stand erect again.  I don’t believe anyone could have faked those tracks.  Besides,” he added, “this particular place was a long way from civilization and why would anyone go to the bother of going out there to plant some phony tracks on the off chance that someone might see them?”

He also observed a camp or sleeping area once that had been built–in Paschall’s estimation–by Bigfoot.  The bed was made of moss pulled from alder branches some 13 feet above the ground.  There was also sword fern snapped off and tossed onto the ground for extra padding.

Paschall described sword fern as extremely tough and fibrous and almost impossible to tear by hand.  Yet those pieces of fern appeared to have been ripped off, several stalks at a time.

Paschall is used to skepticism about his belief in Bigfoot.  When asked to explain the creature’s continued scarcity in this age of vast technology and rapid discovery, he simply replies with a shrug.

“The area we are talking about in California,” he said, “is almost 100 miles square.  It is a trackless, mostly uninhabited by man, and the floor of the forest itself is a deep cushion of rotting material that almost never leaves a footprint of any kind of animal.”

It is not inconceivable to Paschall that such a man-like creature, thought to be about 8 feet in height and tremendously powerful, could live for the most part unmolested and unobserved by man in his secluded forest.

To most people, Sasquatch, or Bigfoot, is no more than an interesting legend.  But to Jess Paschall, it is alive and hiding in the immensity of the forest lands of the Northwest. 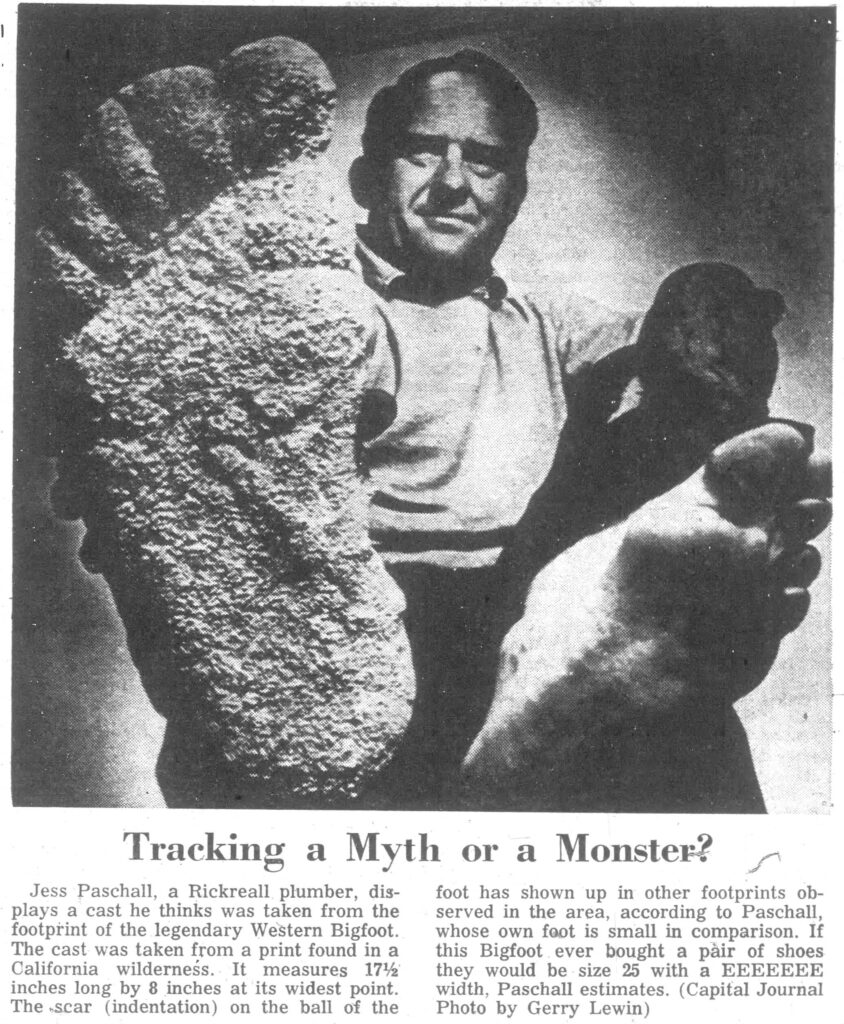