One of the most successful business men in the southwest is George M. Paschal, the honorable Indian trader at the sub-agency three miles south of Fort Sill in the Kiowa and Comanche country.  This gentleman has seen then years in the mercantile business in the Indian country and fully understands all the requirements of that trade.  He has a large stock of general merchandise which is well assorted to meet the demands of his customers both white and Indian.  By honorable and upright business methods and fair treatment to all who favor him with their patronage Mr. Paschal has gained the confidence of all.  Besides the ordinary run of general merchandise and Indian supplies Mr. Paschal carries an assortment of standard farm machinery and implements which are sold at live and let live prices.

Mr. Paschal also provides a market for all produce raised by the Indians as well as for hides, furs and other commodities they desire to sell.  By constant application to business and square dealings this gentleman has grown into an excellent business and is doing well by himself and by his customers.

George Moore Paschal (James Wade, Samuel, Silas, John, William), banker, esteemed citizen and prominent business man of Lawton, died at his home, 515 A avenue, Monday morning at 9 o’clock, after four or five weeks illness, brought on by a stroke of paralysis, super-induced by over physical exertion, from which there was little hopes of recovery since its inception.

Deceased was born in Smith county, Tennessee, in 1862, and was 50 years age.  He came to this country 25 years ago, brought here from Texas by Collier and Sneed, Indian traders, to serve in a clerical capacity, at the Red Store, between here and Fort Sill.  After many years of valuable service he became owner of the business and conducted it with notable success.

In 1901 he was one of the organizers, and the first president of the City National bank.  In the spring of 1964 he sold out his interests in that bank, and together with his late associates, purchased the First National Bank of Lawton and was elected its president which position he held till his death.  He had seen that institution grow from its primitive stages to its present magnificent proportions, with laudable pride and satisfaction.

Mr. Paschal was a stockholder in and president of the First National bank of Waurika, a stockholder in the National Bank of Hastings, a director in the Oklahoma State bank, this city and the owner of considerable other property in Lawton.

He was an extensive feeder and cattle dealer, and at the time of his death was a member of the firm of Elrod and Paschal, who are at the present time, owners of about 3,000 head of cattle and feeding something like 1,000 head for the market.

Mr. Paschal had long been an Indian trader and had the confidence and good will of the Indians to a remarkable degree.  In 1901 he and his brother, R. H. Paschal, formed a partnership and conducted a merchandise business at the Red Store.

In August, 1911, when the Indian business was bout over here, they moved their business to Walter, where, under the management of the latter, a large general merchandise establishment is conducted.

The deceased was married to Miss Shields of Bloomington Springs, Tennessee in 1901.  Of this union three children were born, Virginia, age 11 years, Hilda, age 7 and Lucile, age 15 months, all of whom are living.

George M. Paschal was a man of sterling worth, strict honesty, and capable in business affairs.  Modest and unassuming, he made friends and bound them to him and was admitted to his confidence.  He was the “great white father” to the Indians with whom he had dealt for nearly a quarter of a century, and who sought his advise and direction on all business affairs.  A very strong bond of friendship existed between him and his confidential friends and they are deeply affected by his death.

The funeral will be conducted from the family resident, 515 A avenue, at 2 o’clock this after, Rev. Montgomery, pastor of the South Methodist Church officiating. 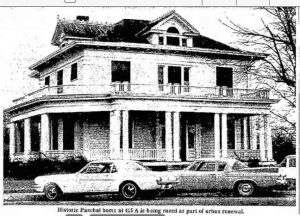