Rufus Howard Paschal, son of George Washington Paschal and Elizabeth Ann Tittle, was born 28 September 1900 in Heard Co., GA, died 29 May 1959 in Troup Co., GA, and was buried in the Ephesus Cemetery in Ephesus, Heard Co., GA.  He was the youngest of ten children.

Rufus married Ida Mae Adair.  Ida, the daughter of Henry Lee Adair and his first wife Martha Daniel, was born 11 August 1903 in Paulding Co., GA, died 29 August 2000 in LaGrange, Troup Co., GA, and was also buried in the Ephesus Cemetery.  Ida’s mother died when she was a baby.  Henry was married secondly to Martha Ada Stone.  Ida was one of eleven children. 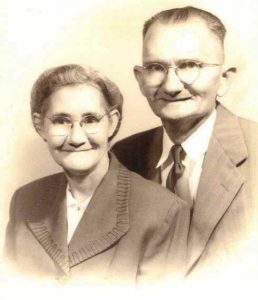 The following is a record of the homes where the Rufus Howard Paschal family lived.

Howard Paschal was living with his parents at the old Paschal home place on what is now the Parmer road in Ephesus before the marriage.  Ida Adair lived at home with her parents in the “old Walt Traylor “ home on the road from Ephesus to the Black Jack mountain.

Their first home after they were married was a little house between the “Maxwell house” and the creek located on the road from the Veal road  to the Paschal home place.  They were sharecroppers, which was a tenant farmer who gives a part of each crop as rent. They made one crop while living there.

Their second home was in Carroll County in the Reevesville community near Bowdon and near the Tallapoosa  river.  Erma was born there in 1925.  They made one crop there.

Their third home was at the “Lavoy Brazil place” which was a little house located off the road going to Veal from Ephesus.  This road turned left in front of Mr. Walter Yates’ home place.  They made either two or three crops there.

Their fourth home was at the “Ben Daniel place” which was a little less than ½ mile south of Ephesus Baptist Church on the main road, which is now highway 100.  They made one crop there.

Their fifth home was at the “Georgia McLendon place” in Ephesus.  The house was on a road which turned off the main road, now highway 100, in front of Mr. Charlie Rogers’ place.  Pete was born there in 1931.  Erma started to school at age 5 while they were living there. They made five crops there.

Their sixth home was in Rockalo, a little place just south of Ephesus.  This was a house in the field on the west side of the main road, now highway 100, near old Rockalo school.  Gearline was born there in 1933.  They made either one or two crops there.

Their seventh home was a little house on the main road to Veal from Ephesus at the “Johnson place.”  This house was very near the road that went south to the Paschal home place. Granddaddy [George Washington Paschal, 1857-1936] had a stroke and died while they were living there.  They made two crops there.

Their eighth home was at the “Maxwell house” which was on the road mentioned above that went to the Paschal home place.  Pete started to school while they were living there.  They made two crops there.

Their ninth home was on the Hopewell road east off the main road, now highway 100, in Ephesus.  Gearline started to school when they lived there.  They made either one or two crops there.

Their tenth home was in the little house, still standing in 2008, in the field below the “old Culpepper place.”  This is just off the main road, now highway 100, going into Ephesus from the south.  They made one crop there.

Their eleventh home was at the “Bird Wood place” which was almost on the Alabama line a little southwest of Ephesus.  The road where the home was located is the first road going west below the Ephesus Baptist Church cemetery.  They made one crop there.

Their twelfth home was in Carroll County at the “Rueben Rogers place” on the road from Veal to Tyus.  Erma graduated from Centralhatchee high school while living there.  She lived with Aunt Alice and Aunt Claude for the last 4 months of school so she could graduate from Centralhatchee.  She got a job and moved to LaGrange in February of the following year.  They made five crops there.

Their thirteenth home was on the “Jug Hill” below Ephesus on what is now Highway 100.   Pete graduated from Centralhatchee high school in 1948. A devastating hail storm came on July 4, 1947 and destroyed ALL of their crops, the garden, etc.  They made two crops there.

Their fifteenth home was in LaGrange, Troup Co., GA.  Without anyone to help with the farming, Howard and Ida Paschal moved to Harmon road off Greenville road in LaGrange in December of 1949.  Erma, Pete and Gearline along with Ethyl Shoemake moved back home with them.  The family lived there until September of 1950.

Their sixteenth home was at 316 Greenville Street in LaGrange.  Gearline and Pete married in 1951 and Ethyl married in 1952.  Howard Paschal died 28 May 1959. He suffered a stroke while working on the roof of a house.  A coworker was able to get him down to the ground and to the hospital where he died within a few hours.  Ida Paschal had a debilitating stroke 14 February 1984. The Paschal House on Greenville Street in LaGrange, GA.

The seventeenth home for the remaining members of the family, Ida and Erma, is at 413 Woodland Drive in LaGrange.  They moved there 28 February 1986.   Erma retired from work 28 February 1987 in order to take care of our Mother.   Ida Paschal died 29 August 2000.  Erma Paschal had a stroke 26 September 2003.  Her sister Gearline is her caregiver.  Erma continues to live at her home, where she died in 2018. This information was given to Annie Gearline Paschal Eley from her sister Erma Christene Paschal in 2005.  It is being typed for a permanent record 22 January 2008. It was then submitted to the Paschal-Paschall Oral History project by their niece Patty Paschal Denton on 1 February 2020. All Photos courtesy of Patty Paschal Denton.