Anderson Turner Paschall (Alexander, Elisha, William) was born on 20 May 1811 in Caswell Co., NC, died on 29 Mar 1887 in Poetry, Kaufman Co., TX and was buried in the Dry Creek Cemetery in Kaufman Co., TX.  He was married first to Louisa A. Susan Hunsacker on 1 Jun 1843 in Graves Co., KY.  Louisa was born on 5 February 1827 in KY and died on 18 July 1867 in Carlisle Co., KY.  They had nine children: Samuel Jackson , William Alexander, Bradford M., Henry Poyner, Susanna E., Anderson Stoveall, Andrew Hunsaker, Nancy Louisa, and Mary Jane.  Anderson was married secondly to Elmira and their children were Jesse Archibald, and Duplin Absylum. 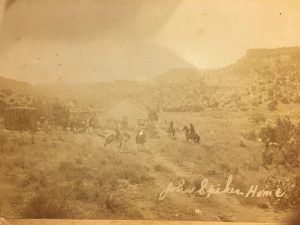 Per H. Bailey Carroll’s article “Caprock,” for the Handbook of Texas, ” The cap, or hard layer, underlying the Llano Estacado is a major geological feature known to Texans as the Caprock. It is not a rock layer in the usual sense of the term but is more technically a “hard-pan” layer that developed a few feet below the ground as highly mineral subsoil particles cemented themselves together to form a rock-like layer that resists erosion. Although the name Caprock technically applies only to the formation itself, the expression is often loosely used to mean the whole Llano Estacado. The Caprock escarpment was formed by erosion about one million to two million years ago. Prehistoric nomadic hunters, Plains Apaches, and Comanches lived in the region. The Spanish explorer Vásquez de Coronadoqv traveled the area in 1541. The Caprock escarpment forms a natural boundary line between the High Plains and the lower rolling plains of West Texas. It stretches from the Panhandle into Central Texas and can be seen most prominently in Briscoe, Floyd, Motley, Dickens, Crosby, Garza, and Borden counties, where it reaches its highest elevations, rising abruptly above the plains at 200, 500, or as much as 1,000 feet. The east-facing wall is often cut by rivers, forming canyons such as Palo Duro Canyon.”

Andrew Hunsaker “Andy” Paschall – “My Great Granddad, Andy Paschall raised turkeys , 60 or 70. He would head [sic] them like cattle to Kaufman and the rail head to ship.  At the 1906 Ft. Worth Stock show he won First Place for his Paschall Bronze Hen.  He sold one to Quanah Parker at the fair for two Silver Dollars.  My Cousin still had one of the dollars.  Great Granddad was offered 80 Dollars for the Prize Hen, but he wouldn’t sale because she was barren and never laid an egg.  The Paschall honestly is what we are known for.” 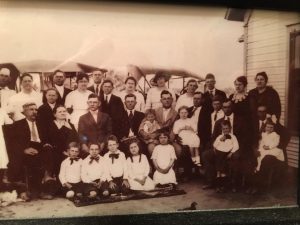 “My Dad [Andy McLean Paschall] is 3rd from the house standing.  My Grandmother [Nettie Odessa McLean Paschal] is on his right.  Granddad [Andrew Henry “Andy” Paschall] is sitting In front of them.  He is holding Aunt Sissy [Doris S. Paschall].  She was 16 years old when I was born In 1934.  Granddad’s three brothers [Young Calbert, Samuel Jefferson, and Guy Galeton] were sitting right of him.  Great Grandparents [Andrew Hunsaker “Andy” Paschall and Ella Spikes Paschall] were sitting right of them.  Notice his dog and chicken.  The rest are Granddad’s four sisters and their husband and kids.” 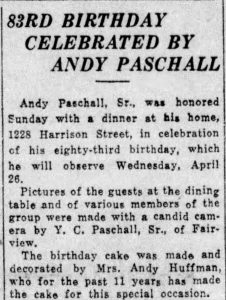 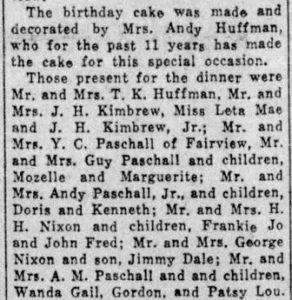 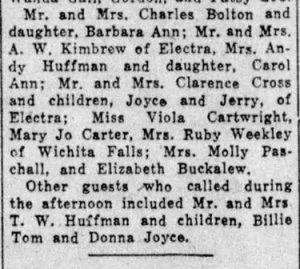 Regarding the 1939 newspaper birthday article, Gordon Paschall writes … “Yep, I was 5 years old. I remember there’s two steps down into the family room.  Great Granddad let me feed the Goldfish in the Lilly Pond in the front yard.  He passed away In 1940.  I was in first grade in Medicine Mounds, TX.  A great man with many talents.” 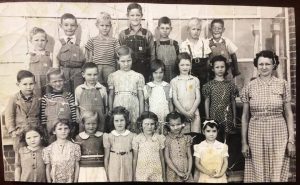 1940 Photo In Medicine Mounds, TX.  Gordon Paschall is in First Grade.  He is the last one, center row, left end.

Medicine Mound, TX – Early inhabitants of this area were Comanche and Kiowa Indians whose campsites were situated around four dolomite hills called Medicine Mounds and known for their healing properties.  The Comanche Indians maintained that the mounds are the dwelling place of powerful, benevolent spirits, which can cure ills, assure successful hunts, and protect in battle.  In an annual ritual the Comanche came to Medicine Mound with cedar incense taken from nearby Cedar Mound.  In 1854, area land was deeded to a railway company.  Anglo settlers began to arrive in the 1870s. A small village developed but was moved 2.5 miles north in 1908 when the Kansas City, Mexico and Orient Railway was built.  A town site was platted that year and was fully established by 1911. At its peak, Medicine Mound boasted 22 businesses and a population of 500. Economic hardships, the Great Depression and a 1933 fire that burned the entire town were primary forces in the town’s eventual demise. The last business closed in 1966. Medicine Mound is now a ghost town located in southeastern Hardeman County in West Texas, southeast of Lake Pauline, and north of the Pease River. 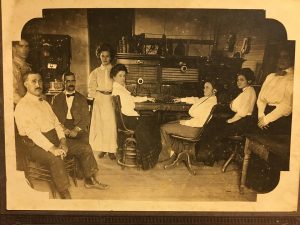 “My Grandmother, Nettie McLean Paschall was seated in the middle telephone operator.  Her Dad, Great Granddad John McLean, moved the family from Georgia To Galveston, TX in 1899.  In 1900, the hurricane killed 12,000 people.  Her Dad moved the family North To Wills Point, TX. His two daughters and a son worked for the phone company.  Grandmother’s sister set next to her and her brother is against the wall on the left side.  My Granddad went to town to see about getting a phone run out to the farm and meet Nettie McLean, or I would not be here.” 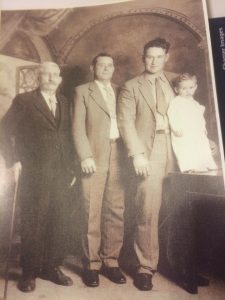 “My Great Granddad Andy H. Paschall, left end,  My Granddad Andy Henry Paschall, My Dad Andy McLean Paschall, and me Gordon McLean Paschall.  This Photo was made in a Studio In Vernon TX.  It was published In The Wichita Falls, TX paper in 1936.  It was rare to have four generations together.  I was born on my Great Granddad’s farm south of Vernon and west of Victory Field where they taught World War I and World War II pilots to fly.  My Great Granddad moved into Vernon and my Granddad and Dad ran the farm.  Dad & Mother were marred In 1932 and lived in a two room Cotton Pullers Shack across a creek from the main house.  My Dad’s sister [Doris] was 16 years old and his brother Tomas Kenneth was 11 years old when I was born In 1934.  Dad called his sister Doris Sister, but I couldn’t say nothing but Sissy and it stuck.  Great Granddad came on horseback from Fulton, Kentucky In 1870’s to live with his Uncle Bill [William Alexander] Paschall, his Dad’s brother In Kaufman, TX . He was 18 years old and travel with a friend,  Mr. Wills, that road on to California.  They left with two horses to the Mississippi River.  They loaded the two horses on a flat Ralf just being built.  The board was not nailed down and one of the horses reared up and his leg went through the floor and broke his leg.  So they were left with one horse.  They did what they called Ride & Tie.  One would ride the horse past the other for two or three miles and tie the horse and start walking.  The other one walked to the horse and road passed him all the way to Texas.  He talked of meeting Indians on the way.   He [Andrew Hunsaker “Andy” Paschall] meets Etta Spikes or my Granddad wouldn’t have been born.  See how marvelous it works.” 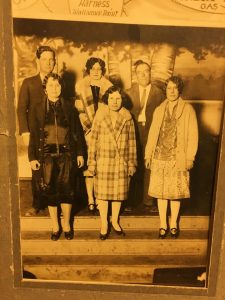 “This is one of Granddad [Andrew Henry] Paschall’s brothers Guy Paschall.  He on the top left and his wife in front of him.”  Guy Galeton Paschall married Claudia Pearl Kincheole. 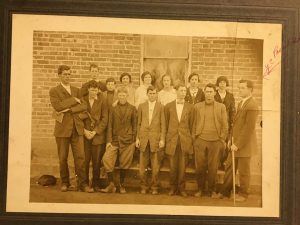 Young Calbert  Paschall – “The far right is Granddad’s brother Y.C. Paschall.  He was a teacher of one room schools.  He was 19 years old and went to college in the summer as he could.  He became Principal & Superintendent of Fairview Schools.  He retired and bought part of the old Ft. Bowie, South of Brownwood, TX, where he raised Angora Sheep & Goats and sold the wool.  He also owned a frozen food locker and tanning business.  He was asked to write a book he called “Things I Remember”.  His wife had passed and their only son was in an accident.  He was in his 80’s when he wrote the book.  I have a copy.” 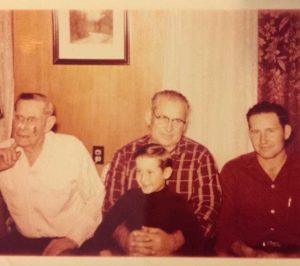