John Paschal was born Nov. 8, 1818, possibly in North Carolina [Rockingham, North Carolina].  John and a brother left North Carolina with a wagon train, along the way the two brothers were separated and never saw each other again.  It is not known if the Indians took him or if he lived to raise a family of his own.  John was raised a Quaker and never did join another faith.

John went on to the country near Fayetteville, Ark. where he settled and lived all his life in the log cabin he built along the river.  He married [Elizabeth Hughes] and they had one son, Tom.  She died and he married [Selina] Brooks and they had Jessie, Jack, Jim and Alph.  She died and he married Rachel or Martha White [possibly Rachel Friley].  John lived to be 95 years old. 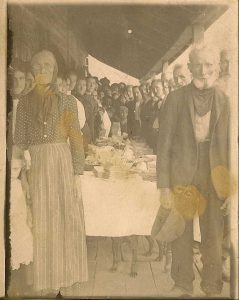 John and Rachel Paschal, Fayetteville, Arkansas in 1909.  Picture taken on the front porch of the log cabin owned by John Paschal on the river.  John lived all his adult life in this cabin, and the picture was taken on his 91st birthday.  Notice the dog hiding under the table.  Picture courtesy of Rebecca Williams Bracewell.

Jesse H. (ID #D4236) was one of the sons of John Paschal and Selina Brooks.  Selina died when Jesse was 3 years old.  Rachel was their step-mother who loved and raised them.

This story was told to Hattie Paschal Leimser by her brother Frank about the Civil War.  Jesse was about 5 years old when they heard the bushwhackers attacking their neighbor down the creek from them. They could hear the screams of the family as they were being killed.  They knew they would probably be the next family hit by the bushwhackers, so the Mother [Rachel White or Friley] hid John in the loft of the cabin where they had flax drying.  She piled the drying flax over John, hoping they couldn’t find him.

They did come, ransacked the place and searched through the house but they didn’t find John, and left them all alive.  This was probably during the year 1863.  During the battles around Fayetteville, they could hear the guns and the fighting.  When the guns would stop they would know the battle was over and the mother would get on her big bay mare “Old Ribbons” and ride to the scene of the battle to find out which side had one.  John didn’t dare leave the place for fear of the bushwhackers, and this was the only way they could find out how the battles were going, and of course this was very important to their whole futures, and their lives depended on knowing. 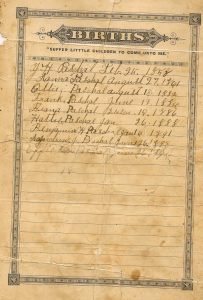 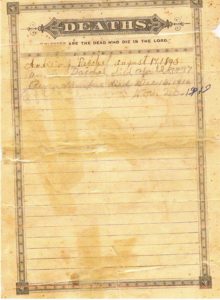 Pages from family Bible in Jesse H. Paschal’s handwriting, listing the death of his wife Anna, their son Andrew, and their daughters Rena and Effie.  Front side of document lists family’s birth.  Given to Hattie Paschal Leimser, passed to her granddaughter Eleanor Leimser Aamodt and given by Eleanor to Rena’s great-great-granddaughter Rebecca Williams Bracewell in September 2010. 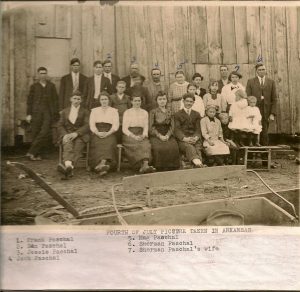 Vance Paschal was born 26 Oct 1914; he appears to be about 2 years of age.  The photo was likely taken around 1916, about one year before John Wesley Paschal died.  Vance’s wife, Bonnie Lou Nickell Paschal, was a historian, school teacher at Winslow, farmer and a writer.  She had more history on the families in Hazel Valley than most.  She contributed three bio articles for the Paschals in the “Families of Washington County, Arkansas”, published in 1989 by the Shiloh Museum of Springdale, Arkansas. This photo was also submitted with the identifications.  John and Margaret (Mag) adopted one of the Hughes children, Hazel.  Her brother, Sid, was not adopted.  Mae White was Mag’s niece.

Some of the sons have already been identified. I believe that Grace Paschal was Grace Jones, daughter by Francis’ first marriage to Gus Jones in 1901.  Whether Sherman adopted her, I do not know at this date. Francis and Gus divorced when he decided to move to Texas and she wanted to stay in Washington County.  This according to a niece to Vance and Bonnie Paschal. Carmel, Ermal, Gladys and Vance were children of Francis and Sherman.